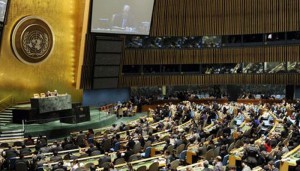 UNITED NATION: The United Nations has once again ignored Pakistan’s renewed efforts to internationalise the Kashmir issue. In a clear snub to Pakistan, the United Nations refused to intervene and reiterated that India and Pakistan need to resolve all differences through dialogue to find a long-term solution to the dispute.
Pakistan had sent a letter to UN Secretary General Ban Ki-moon and blamed India for the current escalations in violence along the disputed border which has resulted in casualties of civilians.The letter signed by Sartaj Aziz, adviser to Pakistan Prime Minister Nawaz Sharif on national security and foreign affairs, had sought the UN’s intervention to resolve the border tensions. He said that Pakistan believes the UN has an important role to play in promoting the objective of peaceful resolution of the Kashmir issue, including through his “good offices”.
“During the period of Oct 1-10, 2014, 20 ceasefire violations along the LoC were reported, resulting in 12 civilian deaths, 52 injured civilians and nine injured military personnel on the Pakistani side,” he said.
Aziz said that Pakistan has exercised utmost restraint and responsibility in responding to these provocations.”The Government of Pakistan sincerely hopes that better sense would prevail on the Indian side to prevent the situation from spiralling out of control,” the advisor said.
A war of words between the two countries over the situation at the LoC took place last week at the UN General Assembly where India said that it was a “matter of deep regret” that Pakistan violated the ceasefire, in which eight people were killed and several others injured.India made it clear that its armed forces are “fully ready” to respond to “provocation”. India also said that the onus of creating a positive environment for normalisation of relations is on Pakistan. The UN has long maintained an institutional presence in the contested area between the two countries.
The UN Military Observer Group in India and Pakistan (UNMOGIP) observes and reports on ceasefire violations along and across the LoC and the working boundary between the South Asian neighbours in Jammu and Kashmir, as well as reports developments that could lead to ceasefire violations.India has however always maintained that UNMOGIP has “outlived its relevance” and has “no role to play whatsoever” on the issue.