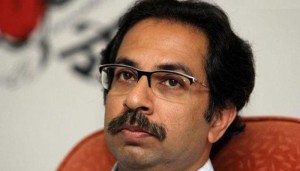 MUMBAI: In the fiercest attack on the Bharatiya Janata Party, Shiv Sena chief Uddhav Thackeray on Tuesday got personal when he dragged the name of the father of Prime Minister Narendra Modi.In an editorial in the Shiv Sena mouthpiece `Saamna`, Thackeray said Modi did not win elections on his own. Now when Modi is the PM, he does not recognise the Maharashtra party anymore. He had indicated this at the time of the formation of Cabinet after winning Lok Sabha elections, said Thackeray.
The Shiv Sena chief added that if his party would not have extended support, even Modi’s father, Damodardas, could not have won majority in Lok Sabha elections.A day after the month-long election cacophony ended in Maharashtra for the 288 Assembly seats and lone Lok Sabha constituency Beed, Thackeray further likened the Congress and Nationalist Congress Party to ‘dead snakes’ and referred to the Bharatiya Janata Party as his party’s enemy number one.
“They (BJP) want to know who is our real enemy? The Congress and Nationalist Congress Party are like dead snakes and pose no threat to us. It is our one-time friend’s ‘fraud’ we shall expose before the people of Maharashtra. It is our duty,” Thackeray said.
Calling the BJP a ‘power hungry’ party, Thackeray, in the scathing edit, said the BJP’s motive is to defeat Shiv Sena.The power hunger prompted the BJP to unilaterally snap its 25-year-old alliance with the Shiv Sena, added Thackeray.He, once again, pointed out that the former ally BJP held election rallies by Prime Minister Narendra Modi and Home Minister Rajnath Singh in Maharashtra.
“The BJP made it a mission to defeat Shiv Sena. The country’s Prime Minister, his Cabinet ministers, MPs and others descended with their ‘army’ here. We installed them in the Centre to defeat Pakistan, but now they are bent on uprooting the party (Shiv Sena) which adopted a strong stand against the neighbour (Pakistan),” the edit said and termed the BJP action regretful.
The Shiv Sena chief further accused the BJP of indulging in caste-based politics and regionalism, just like (Samajwadi Party chief) ​Mulayam Singh Yadav and (Rashtriya Janata Dal president) ​Lalu Prasad Yadav do.”Until yesterday, regional leaders like Mulayam Singh Yadav, Lalu Yadav and (former Haryana chief minister) Bhajan Lal used to come here (Maharashtra) and indulge in votebank politics. And today it seems that entire Gujarat has come to Maharashtra to try and muddle the minds of Gujarati voters. But the commitment of Gujaratis for Maharashtra and their love for Balasaheb Thackeray will make them stand behind the Sena without doubt,” it added.
He blasted Goa Chief Minister Manohar Parikkar for giving homilies on Marathi pride. “What about his pre-election promise of making Marathi a state language of Goa? After elections, he threw (the promise) into the dustbin?”
The edit pointed out how former Karnataka chief minister BS Yeddyurappa, the man who committed atrocities on Marathis and insulted the sacrifices of 105 martyrs killed in January 1960 during the Samyukta Maharashtra Movement in that state, was also roped in for the campaign. “Everybody in the BJP is playing their own vote bank politics.”Attacking Vinod Tawde, the leader of the opposition in the Maharashtra Legislative Council, and among the BJP chief minister hopefuls, the Sena accused him of coveting power for which he discarded the 25-year-old alliance between the BJP and the Sena.It objected to Tawde’s statement that regional parties stoked flames of “self-respect” as a result of which development suffered.
“Does it mean that all the BJP’s celebrations of its alliances with various regional parties in the recent past were a fraud and false display of love (for smaller regional parties)?” the Sena asked.This was a clear indication that all these years, the BJP was using and looting regional parties for its own vested interests, the edit said.
“On one hand he (Tawde) speaks of constructing a magnificent memorial for Bal Thackeray and on the other they (BJP) want to reduce the importance of Mumbai and want to create Vidarbha out of Maharashtra.”The real memorial and tribute to Bal Thackeray would have been to continue the BJP-Sena alliance and preserve the unity of Maharashtra, the party said.Maharashtra is going to polls on October 15.