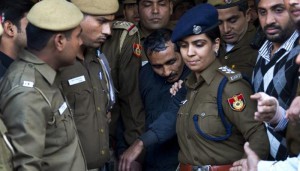 NEW DELHI : Police will on Tuesday continue its questioning of Uber officials in Delhi. Also, reports say the Delhi Commission for Women (DCW) has summoned Uber CEO Travis Kalanick in connection with the rape case.
Kalanick, earlier, had said in a statement: “What happened over the weekend in New Delhi is horrific. Our entire team’s hearts go out to the victim of this despicable crime. We will do everything,
I repeat, everything to help bring this perpetrator to justice and to support the victim and her family in her recovery. We will work with the government to establish clear background checks currently absent in their commercial transportation licensing programs. We will also partner closely with the groups who are leading the way on women’s safety here in New Delhi and around the country and invest in technology advances to help make New Delhi a safer city for women.”

In the wake of an Uber cab driver allegedly raping a woman in Delhi, the state government has banned several other private radio taxi services apart from Uber.
As per reports, the transport department has in a notice said that only six private radio taxi services registered under the Economy Radio Taxi Scheme will be allowed to operate in the city. The services allowed include Easy Cabs, Mega Cabs, Meru, Chanson, Yo Cabs and Air Cabs.
This means that other services including Ola Cabs, Taxi for Sure and TaxiPixi will not be able to operate in the city.”All other transport/taxi service providers through web-based technology, who are not recognised, are prohibited from providing such services in the NCT of Delhi till they get licence/ permission from the transport department,” a statement issued by the department said, as per reports.
In the latest development in the rape case involving the driver of Uber, the Delhi Police have registered an FIR against the international taxi-booking service.
The FIR was lodged late on Monday night after Delhi Police officials had said earlier in the day that Uber will be booked for alleged cheating as well as under other charges including criminal negligence and abetment to the crime.
“We have registered a separate FIR against Uber under Section 420 (cheating) of IPC. In investigations so far, it emerged that the company cheated their customer on the pretext of providing safe commuting with duly verified driver,” Deputy Commissioner of Police (North) Madhur Verma told a News Agency.
The Delhi government had yesterday banned Uber and the Centre is mulling similar action against the company across the country.
The actions came as outrage grew over the alleged rape of a 27-year-old woman executive by the Uber cab driver who is stated to be a repeat offender and was jailed before in another rape case.
In another disclosure yesterday, the police said that a ‘character certificate’ issued in the name of an Additional DCP of the Delhi Police to the accused driver Shiv Kumar Yadav in August this year was “fake”. This certificate was provided to Uber, police said.Delhi Police Commissioner BS Bassi has ordered a probe into this. A fresh FIR of forgery, in connection with this, has also been registered against the driver.

Yadav was yesterday remanded in police custody till December 11 by a Delhi court.32-year-old Yadav, who was arrested in Mathura on Sunday, had spent seven months in jail in a rape case in 2011 as well. He was later acquitted in that case.
Investigators probing the rape case have found “criminal negligence” and “abetment” of crime by the US-based cab company whose General Manager (Marketing) Gagan Bhatia was grilled yesterday. Bhatia claims to be in-charge of the company’s India operations, police said.
“The transport department has banned all activities related to providing of any transport service by www.uber.com with immediate effect. The department has also blacklisted the company from providing any transport service in the NCT of Delhi in future,” the Delhi government said in a statement.The government added that it has cancelled the taxi’s permit, registration certificate as well as the driver’s license.
Uber has also been faulted for violating the Motor Vehicles Act by providing a taxi with an all-India permit for a local journey.
The rape case also brought to spotlight the laxity in enforcement of established norms governing the transport sector in the capital.”He did not have the mandatory PSV badge that is issued by the state transport authority after getting a police verification. Uber did not bother to check that and hired him,” said a police officer.
Yadav, who was driving the Uber cab, allegedly raped the woman on Friday night when the victim, who works for a finance company in Gurgaon, was headed back to her home in north Delhi’s Inderlok area.
The police said that during investigations prime facie it has emerged that criminal negligence was made out on the part of Uber as a number of alleged shortcomings were found on their part as neither the driver was verified nor there was a GPS tracking device in the car.
As per norms, it is mandatory for all private cab service providers to carry out abackground check and obtain police verification of the drivers.Official sources said the Union Home Ministry is planning to ask all state governments and administration of nine Union Territories, where Uber runs its cab services, to put a ban on it. Uber cab services are available in Bangalore, Mumbai, Hyderabad, Chennai, Jaipur, Ahmedabad, Chandigarh, Kolkata and Pune.
The city yesterday witnessed protests at various places including outside Home Minister Rajnath Singh’s residence. Holding placards and chanting anti-government slogans, the protesters demanded better security for women and punishment for the driver.
The minister, meanwhile, promised to bring the accused to justice. “The government strongly condemns this dastardly act. It will be ensured that all necessary steps are taken to bring the offender to justice,” the minister told the Lok Sabha.