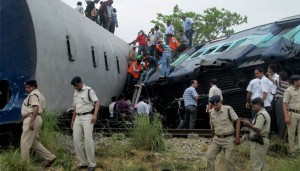 GORAKHPUR: Two speeding passenger trains collided near here late Tuesday night, killing 14 people and injuring 45 others.
The Maduadeeh-Lucknow Krishak Express hit Barauni-bound express train from Lucknow from the side while it was on the loop line at Nandanagar railway crossing, about seven kilometers from here, at around 11 pm, Chief Public Relation Officer of North-Eastern Railway Alok Kumar Singh told a news agency today.
As a result of the collision, five unreserved general class coaches of the Barauni Express derailed. The Krishak Express tore through the fifth coach and badly damaged the sixth, seventh and the eight coach of the Barauni Express.
Union Railway Minister DV Sadananda Gowda, meanwhile, expressed profound grief over the loss of innocent lives in the accident.
The Railway Minister further announced an ex gratia of Rs 2 lakh each to the next ofkin of those who died in the tragedy, Rs 1 lakh each to those grievously injured and Rs 20,000 each to those who sustained less serious injuries.
Gowda has also directed to provide best treatment to people injured in the accident on LJN Divison of North East Railway.