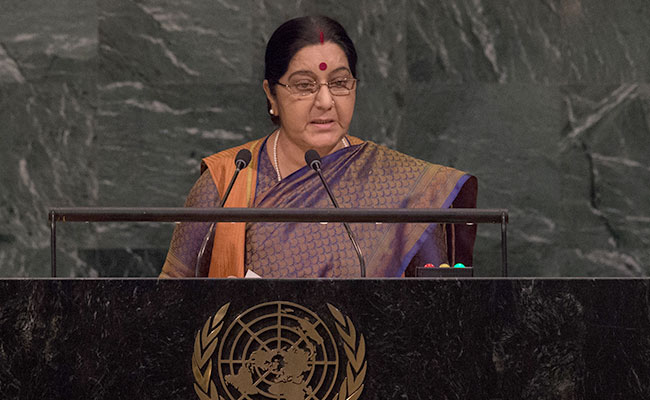 NEW YORK : Describing terrorism as an “existentialist danger” to mankind, India on Saturday wondered how the international community will fight the menace if the UN Security Council cannot agree on the listing of terrorists.  In her address to the 72nd UN General Assembly session, External Affairs Minister Sushma Swaraj said terrorism is at the very top of problems for which the United Nations is searching for solutions.
In a takedown of Pakistan for its non-stop support to terrorism, Foreign Minister Sushma Swaraj today dismissed Pakistan Prime Minister Shahid Khaqan Abbasi’s accusations of violating human rights, telling the United Nations General Assembly, “Look who is talking”.

“We are completely engaged in fighting poverty; alas our neighbour Pakistan seems only engaged in fighting us,” Ms Swaraj said in a hard-hitting speech that took swipes at Islamabad for exporting terror that kills hundreds of people. Ms Swaraj also asked Pakistani leaders to introspect, reminding them that though both countries became independent at the same time, India is globally known as an IT superpower, and Pakistan, “as the pre-eminent export factory for terror”.

Swaraj was apparently referring to China, a veto-wielding permanent member of the Security Council, which has repeatedly blocked India’s move to put a ban on Jaish-e-Mohammed chief Masood Azhar under the Al-Qaeda Sanctions Committee of the Council. The JeM has already been on the banned list.
“We set up IITs, IIMs, AIIMS and ISRO. What did Pakistan make? They set up Lashkar-e-Taiba, Jaish-e-Mohammed, Haqqani Network, Hizbul Mujahiddeen,” said Foreign Minister Sushma Swaraj, who addressed the gathering of leaders from 193 countries for the second consecutive year. She spoke in Hindi.
Ms Swaraj said a country that has been the world’s greatest exporter of havoc, death and inhumanity became a champion of hypocrisy by preaching about humanity from this podium. The jibe was aimed at Pakistan Prime Minister, who had devoted much of his first address accusing India of terror against his country and what he referred to as “war crimes” in Kashmir.

“I would like to request this august assembly to stop seeing this evil with self-defeating and indeed meaningless nuance. Evil is evil. Let us accept that terrorism is an existentialist danger to humankind. There is absolutely no justification for this barbaric violence,” she said. Swaraj called on the UN member states to display their new commitment by reaching agreement on the Comprehensive Convention on International Terrorism this year itself.

Although India proposed a Comprehensive Convention on International Terrorism (CCIT) as early as in 1996, yet two decades later the United Nations has not been able to agree on a definition of terrorism, she rued. “We have been the oldest victims of this terrible and even traumatic terrorism. When we began articulating about this menace, many of the world’s big powers dismissed this as a law and order issue. Now they know better. The question is: what do we do about it?” she asked.

“We must all introspect and ask ourselves whether our talk is anywhere close to the action we take. We all condemn this evil, and piously resolve to fight it in all our declaratory statements. The truth is that these have become rituals,” she said.   “The fact is that when we are required to fight and destroy this enemy, the self-interest of some leads them towards duplicity,” Swaraj said.

India has caustically described Pakistan as a country whose counter-terrorism policy was to “mainstream and upstream terrorists” by either providing safe havens to terror leaders in its military town or protecting them with political careers — a reference to Osama bin Laden. India attaches highest priority to development and prosperity of the region under its “neighbourhood first” policy, Sushma Swaraj had said in a statement yesterday.
Sushma has asked the BRICS grouping comprising Brazil, Russia, India, China and South Africa to condemn efforts, including by states, of using religion to sponsor terrorism against other nations.
The Comprehensive Convention on International Terrorism or CCIT was proposed by India in 1996 to enhance prosecution and extradition of terrorists.
sembly session in New York, (With Agency Inputs ).