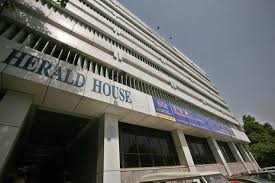 NEW DELHI : At the heart of the tax case that Congress leaders Sonia and Rahul Gandhi face in a Delhi court, lies the historic Herald House which was once the office of the National Herald, a newspaper founded and edited by Jawaharlal Nehru, Mr Gandhi’s great grandfather.
The Gandhis have been summoned by the court next month to respond to the allegation of BJP leader Subramaniam Swamy that the Congress used political funds to enable a company in which they own majority stake to acquire Associated Journals, which ran the National Herald. Mr Swamy has alleged in court that the Gandhis aimed to grab property worth thousands of crores that belonged to the publishing company.
The Congress denies that allegation and says it gave Associated Journals a Rs. 90 crore loan because it was in dire straits. Herald House, situated on Bahadur Shah Zafar Marg, a busy main road in the heart of the capital often called the Fleet Street of India for the number of newspaper offices based there. This reporter found that the building is buzzing with commercial activity.
In the past two years since the Gandhi-family-led private company called Young Indian took over Associated Journals, four floors of the five-storey building have been let out at market rates. The ground floor and the first floor are let out to the Passport Seva Kendra of the Ministry of External Affairs and the second and the third floor to IT major Tata Consultancy Services or TCS.
While Passport Seva Kendra pays a market rent of about 60 lakh rupees per month, TCS pays 27 lakh rupees, sources told  On the top floor is the office of Young Indian, registered under section 25 of the Companies Act, which lists Sonia Gandhi and Rahul Gandhi as majority stakeholders with 76 per cent stake in total. The rest is divided between Congress veterans Motilal Vora and Oscar Fernandes.
The Congress claims Young Indian is a non-profit company, but questions are being asked about who benefits from Associated Journal’s properties. Like Herald House, Young Indian has also acquired other major properties across the country worth Rs. 5,000 crore, according to a court order.
Mr Swamy contends that political parties, which are exempt from taxes on all sources of income, cannot use that money to give loans for commercial transactions. He has also alleged that the Young Indian, through Associated Journal, draws commercial rent on a property that was acquired at a concessional rate to run a nationalistic newspaper, which he says is against the law.
“Absolutely not,” said Randeep Surjewala, Congress spokesperson, denying the allegation that the Congress party’s loan to Associated Journal is against Election Commission rules. “Associated Journal and Young Indian are two separate entities and no money is being received by anybody in the Congress,” said Mr Surjewala, adding, “The money (rent) is being collected to revive the National Herald.” The newspaper was shut down in 2008.
When asked about the allegation of tax evasion, Mr Surjewala said, “All newspaper offices in that area are renting out space.”When  contacted MEA about the choice of Herald House for the Passport Seva Kendra or PKS, they said it was chosen for them by TCS. However a TCS spokesperson said the final choice was made by the Ministry of External Affairs. In a statement they said, “Herald House was chosen for its central location and accessibility and the rentals paid are as per market rates. Multiple locations were shortlisted for every PSK site and final approval for a site was accorded by the MEA.”
When contacted Sam Pitroda, Congressman and one of the directors of Young Indian, he said, “Yes, I am a director at Young India. As per my knowledge nothing wrong has been done. I have nothing more to say at this stage.”