JAIPUR: With 117 constituencies set to go to vote in the sixth phase on April 24, the Congress has come up with a bizarre appeal, asking voters to keep their televisions switched off till Thursday.Addressing a rally in Karauli in Rajasthan, yesterday, Congress general secretary CP Joshi said, “There is no wave of BJP. It is better you all keep your televisions switched off for next three days and vote for Congress.”Joshi was the party candidate from Jaipur Rural seat that went to polls on April 17. 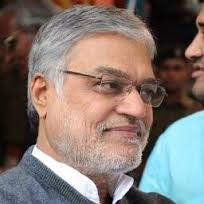 Congress vice president Rahul Gandhi also addressed the rally. Out of the total 25 parliamentary seats in Rajasthan, polling took place in 20 seats on April 17, while the remaining five seats will vote on April 24.Clearly, the Congress appears to be wary of BJP’s advertisement blitz and is desperate for a good showing in the 117 seats that vote on Thursday.
Joshi’s ‘advice’ come as a time when Congress leadership is going all out against Narendra Modi.Led by party president Sonia Gandhi and vice president Rahul, the Congress is trying its best to negate the supposed ‘Modi wave’ in the country.At the Karauli rally, former chief minister Ashok Gehlot said that there is need “to understand the lies” of the BJP Prime Ministerial candidate Narendra Modi.
“He talks as if he would turn the country into heaven and would bring down inflation if his government is formed but we have to understand the lies of Modi,” Gehlot said.The BJP has hit back at Joshi saying that his comments reflect the fear in the Congress of an imminent defeat.