NEW DELHI : Bharatiya Janata Party’s Giriraj Singh came under attack on Monday from Muslim cleric Mufti Mukarram who took strong offence to the Bihar leader questioning loyalty of certain sections of the society and taunting them to ‘support Narendra Modi or leave for Pakistan’.Talking to reporters, Mukarram said, “This is not Giriraj Singh’s India, it belongs to all of us. We will live and die here.” 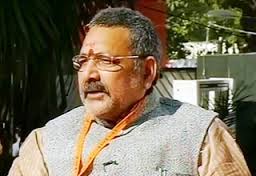 And not just Giriraj, Mukarram took the attack to other saffron outfits involved in ‘fanning communal fire’, and said, “Action should be taken against Praveen Togadia and people who fan communal sentiments should be put behind bars. Earlier on Sunday an FIR was filed against Giriraj Singh, former BJP chief Nitin Gadkari and some other party leaders over the controversial remark by Singh that the Centre gave subsidy to those who exported beef and taxed those who reared cows.
The FIR was lodged under the Bihar Representation of Improvement of Animal Act, 1952, under the Representation of People’s Act 1951, and for violation of the Model Code of Conduct, police said.
Deoghar Superintendent of Police Rakesh Bansal confirmed that an FIR has been filed against the leaders with the Mohanpur police.On the direction of sub-divisional magistrate-cum-deputy Returning Officer Jay Jyoti Samanta, the FIR was filed against Singh, Gadkari, BJP’s Godda candidate Nishikant Dubey and those who were on the stage during the meeting at Mohanpur, Bansal said.
Singh had also said in his poll speech that those who opposed the party’s prime ministerial candidate Narendra Modi would have to shift base to Pakistan after the outcome of election results.