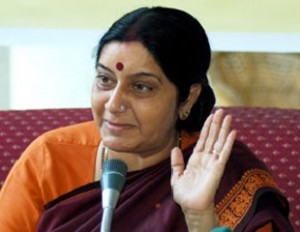 NEW DELHI: External Affairs Minister Sushma Swaraj is expected to brief parliament over the Bangkok meeting of the NSAs Ajit Doval with Pakistan NSA Lt Gen.Nasir Khan Janjua and answer criticism from the Opposition over the secrecy surrounding the talks.
According to Sources during her intervention on Monday, she would also make an announcement about her travel to Pakistan to attend the Heart of Asia conference on Afghanistan. According to senior officials, Ms. Swaraj will travel to Pakistan on December 9th for a two-day visit, where she is expected to meet her counterpart Pakistan Foreign Affairs Adviser Sartaj Aziz.
In a surprise development kept secret until their meeting was over, Indian and Pakistani National Security Advisors led delegations for talks in Bangkok on Sunday. In a joint press release announcing the meeting between Pakistan NSA Lt. Gen (Retd) Nasir Khan Janjua and Mr. Ajit Doval, Foreign Secretaries Aizaz Ahmad Chaudhury and S.Jaishankar, and other officials, the MEA said that the discussions covere.
“covered peace and security, terrorism, Jammu and Kashmir, and other issues, including tranquility along the LoC.” According to the statement, the meetings had arisen pursuant to the meeting between PM Modi and PM Nawaz Sharif in Paris on November 30th, which had earlier been described by the MEA as only “a brief exchange of courtesies”.
Senior officials have confirmed to The Hindu that External Affairs Minister Sushma Swaraj will also visit Islamabad this week, leading the Indian delegation to the ‘Heart of Asia’ donor conference on Afghanistan. Ms. Swaraj, whose visit has yet to be announced, will travel on Tuesday for a two-day visit on December 8-9, and is expected to meet the Pakistani leadership. The meetings are part of the government’s decision
to reset the engagement with Pakistan that has suffered after the cancellation of Foreign Secretrary talks in 2014 and NSA talks earlier this year, and will ensure that the governments meet at four levels: of PM, EAM, NSA and Foreign Secretaries within a span of 10 days.
The developments were welcomed by the opposition parties, including the National Conference in Jammu and Kashmir. However the Congress spokesperson Manish Tewari questioned the secrecy over the talks, calling it a “grand betrayal of the position the BJP government has held so far”.
Bangkok bonhomie after Ufa process collapse over NSA talks: How it happened Sources told The Hindu there were several reasons for holding the NSA talks away from the public glare in Thailand, and came after both sides agreed to compromise on their previous positions that led to the cancellation of NSA talks on August 23-24. While the government agreed to include Jammu and Kashmir in the talks along with terrorism, which it had earlier refused to, the venue of a third country obviated Pakistan’s requirement of meeting with the Hurriyat conference.
Also, given that the NSA talks had been agreed to by the PMs in Ufa, it was necessary to hold them prior to EAM Sushma Swaraj’s proposed visit to Islamabad. Finally, in 2016, India will host the Heart of Asia conference, where it would like a senior participation from all member countries, while PM Modi has accepted an invitation to visit Pakistan for the
SAARC summit expected next November. The statement issued in Bangkok said the talks “were held in a candid, cordial and constructive atmosphere” and “It was agreed to carry forward the constructive engagement”.
According to the sources, some of the details of the Bangkok dialogue were ironed out between the existing channels of communication between the NSA and Pakistan High Commissioner to India Abdul Basit, and through Foreign Secretary S. Jaishankar and Indian High Commissioner in Islamabad TCA Raghavan with the Pakistani Foreign Ministry. Reliable sources also indicated that Mr. Doval may have
spoken directly to his Pakistani interlocutor General Janjua prior to the talks as well. Lt. Gen Nasir Janjua was appointed in October this year as the NSA to PM Sharif, taking the role from the Foreign Affairs Advisor Sartaj Aziz.
The newfound bonhomie between the governments in Delhi and Islamabad has also raised hopes from the cricket authorities over the possibility of a series to be played between India and Pakistan later this month. The BCCI has forwarded a proposal to the Ministry of External Affairs to allow a series in Sri Lanka in Mid-December between the two countries.
While an official present at the meeting said the cricket issue “wasn’t even discussed”, the meetings have given a boost to chances the cricket series too could receive clearance.(Hindu)