GANDHINAGAR: Senior BJP leader Sushma Swaraj has skipped the crucial Narendra Modi’s meeting in Gandhinagar and has left Delhi for Bhopal According to sources.Swaraj is said to have told former party Chief Nitin Gadkari that she wanted “a respectable role” in the next government, with exit polls projecting a NDA win. Sources said Sushma Swaraj always advocates that decisions should be taken collectively by the BJP parliamentary board and she has conveyed the same to the party high command 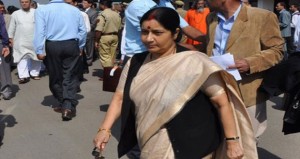 Gadkari had met Swaraj, who has largely kept to herself during the elections, on Wednesday. There are indications that if the NDA forms the next government at the Centre, Sushma Swaraj can be made a member of Cabinet Committee on Security (CCS) that comprises five ministers, including the prime minister.Two news channels had said that the BJP may even ask the senior leader to head the defence ministry.