NEW DELHI : The government today announced the appointment of Lt Gen Dalbir Singh Suhag, a veteran infantry officer, as the next Army chief to succeed incumbent Gen Bikram Singh after his retirement on 31 July. 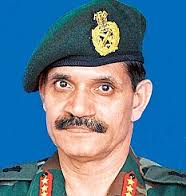 “Government have decided to appoint Lt Gen Suhag, who is presently the Army vice chief as the next Chief of the Army Staff (COAS) after retirement of the present chief General Bikram Singh,” a Defence Ministry release said.Suhag, a third generation soldier and son of a retired Subedar, will be the 26th Army chief after the Appointments Committee of Cabinet cleared the recommendation of the Defence Ministry yesterday, brushing aside BJP’s protests. 59-year-old Lt Gen Suhag, a Gurkha officer who had participated in the 1987 Indian Peace Keeping Force (IPKF) operation in Sri Lanka, is currently the Vice Chief of Army Staff and the seniormost among the Lieutenant Generals.
He will have tenure of 29 months as the chief of the 12-lakh-strong force when he takes over from Gen Singh who retires on 31 July.Suhag was made the Vice Chief of Army Staff in December last year. He had taken over as the Eastern Army Commander on 16 June, 2012.He was at the centre of a controversy triggered by ‘Discipline and Vigilance’ ban imposed on him by the then Army chief Gen VK Singh in connection with an intelligence operation in Assam earlier. The ban on Suhag, who was then 3 Corps Commander, was lifted soon after Gen Bikram Singh took over in May 2012. The BJP had been questioning the “hurry” in making the appointment and had insisted that the matter be left to the next government as there was still time left.