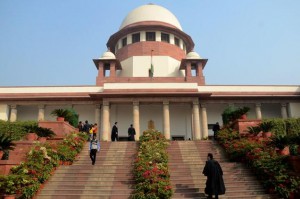 NEW DELHI: The Supreme Court on Monday rejected a plea against an order of the National Green Tribunal banning all vehicles which are more than 15 years old from plying on Delhi roads.“Let us assist them (NGT) and not discourage them,” a bench of Chief Justice H.L. Dattu and Justice Arun Mishra said while dismissing a plea filed by a lawyer seeking setting aside of the decision of the green panel.
The bench further said the NGT was “only repeating the orders passed by Constitutional courts (SC/HCs) in the past.”“All vehicles, diesel or petrol, which are more than 15 years old shall not be permitted to ply on the roads and wherever such vehicles of this age are noticed, the concerned authorities shall take appropriate steps in accordance with law including seizure of the vehicles in accordance with the provisions of the Motor Vehicle Act.
“The vehicles which are more than 15 years old, will not be permitted to be parked in any public area and they shall be towed away and challenged by the police in accordance with law. This direction would be applicable to all vehicles without exception i.e. two wheelers, three wheelers, four wheelers, light vehicles and heavy vehicles irrespective of whether commercial or otherwise,” the NGT, in its November 26, 2014 order, had said.

Lawyer Vishaal Shripati Jogdand challenged the order in the apex court on various grounds including that the NGT had no jurisdiction to hear a case which was of the nature of public interest litigation.“Instead of age of the vehicles, the fitness of the vehicles can be and should be the criteria from stopping them from plying on roads,” Debasis Misra, appearing for Jogdand, said.
Even bringing CNG in 1997-98, did not result in reduction of air pollution and hence, an investigation be undertaken to find out the reasons for it, he said.The bench, however, was not inclined to hear the plea in detail and dismissed it after a brief hearing.Earlier, the NGT, besides banning 15-year-old diesel and petrol vehicles, had also said that no person shall be permitted to burn plastic or any other material in the open.
The NGT had also said that if any person is found to be burning plastic or any other material including tree leaves in the open, he would be liable to be proceeded against in accordance with law.
It had held that in all the markets in Delhi, “it shall be ensured tarred roads for regular traffic are not permitted to be used for parking thus causing avoidable congestion of traffic“.It had also directed the Delhi government and others to create a web portal where an aggrieved person can upload the photographs depicting the pollution.

With an aim to reduce vehicular pollution, the NGT had also said, “Immediate steps will be taken by all the Respondents and concerned authorities to provide cycle tracks in Delhi and efforts should be made to encourage cycling in Delhi.”