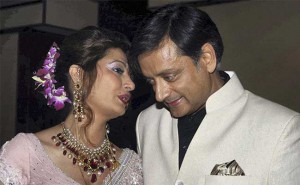 NEW DELHI: Sunanda Pushkar’s cellphone and computer records have been analysed by forensic experts in Gujarat who have shared their report with the Delhi Police today.Ms Pushkar was married to Congress leader Shashi Tharoor when she was found dead in a five-star hotel in Delhi in January 2014. She was 51.
Mr Tharoor has been interrogated a few times by the police, which has not named any suspects in its murder case. The police says that based on medical reports, Ms Pushkar died of poisoning.Mr Tharoor, 59, has repeatedly pledged his cooperation to the police inquiry and urged that the investigation be fair and free of political motive and pressure.
Delhi Police Chief BS Bassi has said that the investigation will try to uncover whether there are any links between Ms Pushkar’s death and the Indian Premier League or IPL, the massively-popular domestic cricket league. In 2010, Mr Tharoor had to quit as minister in the Congress-led government after it emerged that Ms Pushkar, who he was then dating, had been given 15 million stake for free in the Kerala franchise of the IPL. Mr Tharoor, who is from Kerala, had lobbied hard for the franchise.
The couple married in late 2010; it was the third marriage for both.Just days before she died, Ms Pushkar on Twitter accused her husband of having an affair with a Pakistani journalist.