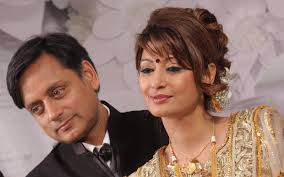 NEW DELHI : Delhi police has said Shiv Menon, son of former union minister and Congress leader Shashi Tharoor, will be questioned in connection with murder of his mother Sunanda Pushkar.
Menon is Pushkar’s son from an earlier marriage.Sunanda was found dead in a five-star hotel room in Delhi in January 2014, after publicly accusing Congress party lawmaker and former UN diplomat Tharoor of having an extra-marital affair with a Pakistani journalist.
After an autopsy initially concluded Pushkar probably died of an overdose of anti-depressant drugs, police said that she was poi soned and a case was registered earlier this month, nearly a year after her death.
Tharoor, who was questioned for more than three hours, is likely to be questioned again by the police.”Yes, he is likely to be questioned in next two to three days. We are going to talk to him,” said Delhi Police Commissioner, BS Bassi.
“If necessary, we will also talk to him (Shashi Tharoor) again,” he added.A Special Investigation Team (SIT) has been formed for probe in Pushkar’s death.Meanwhile, a leader of India’s regional Rashtriya Janata Dal, Amar Singh, who claimed to be a close friend of Pushkar was also questioned by the SIT.
“They questioned me for two hours and I can’t reveal anything because it is part of an ongoing investigation,” said Singh.Pushkar and Tharoor married in 2010, a third for both.