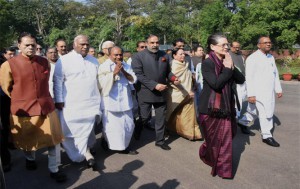 NEW DELHI: In a big show of opposition unity, Congress president Sonia Gandhi walked briskly flanked and followed by over 100 lawmakers as she led a march from Parliament House to the Rashtrapati Bhawan less than a kilometre away, in protest against land reforms crucial to the government’s economic agenda.
After submitting a memorandum to President Pranab Mukherjee, Mrs Gandhi said, “We oppose the Modi government on the land bill and are determined to defeat its designs… We request the President to intervene and ask the Modi government not to go ahead with land bill in the Rajya Sabha.”
She said 14 parties had marched today to protest against what they call an “anti-farmer” land acquisition bill, which was passed last week in the Lok Sabha where the government has a big majority.The AIADMK, Biju Janata Dal and the Bahujan Samaj Party did not join the opposition march.
In the Rajya Sabha or upper house, the Opposition is in majority. The Congress, which helped pass insurance reforms in the Rajya Sabha, has refused to back the land bill, saying it will only support the version that its government passed in 2013 with a broad consensus of all parties, including the BJP.
The present bill, the Congress argues, must be sent to a parliamentary committee for review.The government needs to pass the bill in both houses of Parliament soon; the ordinance or emergency executive order that it seeks to ratify will lapse on April 5.
“The only purpose of this march was to obstruct development. Congress’ politics is to stop what we are doing for the poor. They have no right to stop the states who want to go ahead with this,” said Finance Minister Arun Jaitley.
This morning, the government intervened to allow the opposition protest march after the Delhi police declared that the lawmakers could not collect at Parliament House as the area is under Section 144 of the Code of Criminal Procedure, which prohibits the assembly of more than four persons, when Parliament is in session.