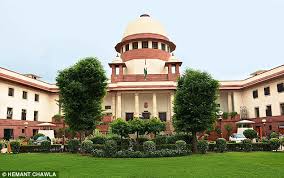 NEW DELHI: In a blow to the erstwhile UPA government, the Supreme Court on Tuesday set aside the notification to include Jats in the Central list of Other Backward reservation to Classes (OBC) for according benefits of them.
The judgement, reserved on December 17, 2014, was pronounced by a bench of Justice Ranjan Gogoi and Justice Rohinton Fali Nariman.”We set aside the notification to implement Jats in the Central list of Other Backward Classes (OBC),” the bench said.
The bench also found fault with the Centre’s decision to overlook the findings of the National Commission for Backward Classes (NCBC), stating that Jats need not be included in the Central list of OBC as they don’t form socio-economic backward class.
“Caste, though a prominent factor, cannot be the sole factor of determining the backwardness of a class,” the bench said, while referring to the historic judgement rendered by a larger bench on the implementation of the Mandal Commission recommendations on OBC reservations.
“Neither can any longer backwardness be a matter of determination on the basis of mathematical formulae evolved by taking into account social, economic and educational indicators”, the court said.The bench also said the “possible wrong inclusion of a class in the past cannot be a basis for the further wrong inclusion.”
Determination of backwardness, the court said “must also cease to be relative; possible wrong inclusions cannot be the basis for further inclusions but the gates would be opened only to permit entry of the most distressed. Any other inclusion would be a serious abdication of the constitutional duty of the state”.
It also noted that the inclusion of politically organised class like Jat would adversely impact the welfare of the other backward classes.”We can’t agree that politically organised Jats are backward class so as to be entitled to OBC reservation.”
The bench said though the Union of India is empowered under the constitutional scheme to provide reservation to a particular class but it cannot be permitted to do so on the basis of a decade-old-finding about the backwardness of a caste.
Holding that the notification issued on March 4, 2014 was not justified, the court said: “The view taken by the NCBC to the contrary is adequately supported by good and acceptable reasons which furnished a sound and reasonable basis for further consequential action on the part of the union government.”
“In the above situation, we cannot hold the notification dated 4.3.2014 to be justified,” the court said.
“Accordingly… the aforesaid notification… including the Jats in the Central List of Other Backward Classes for the States of Bihar, Gujarat, Haryana, Himachal Pradesh, Madhya Pradesh, NCT of Delhi, Bharatpur and Dholpur Districts of Rajasthan, Uttar Pradesh and Uttarakhand is set aside and quashed.”
The decision came on a PIL filed by the OBC Reservation Raksha Samiti – an organisation of members of communities that are included in the Central List of Backward Classes.
The PIL had alleged that the March 4 notification was issued by the then central government a day before the Model Code of Conduct (MCC) for the Lok Sabha elections came into force to help the ruling party garner votes.
On April 1, the apex court had asked the Centre why it allegedly ignored the advice of the NCBC to keep the Jat community away from reservation benefits.
The court had also said that the matter was “serious” and had directed the Ministry of Social Justice and Empowerment to place before it all the material, records and files pertaining to the decision, to see “whether there was application of mind or not” while issuing the March 4 notification.The current NDA government had in August last year
supported before the apex court the UPA regime’s decision to include the Jat community in the Central OBC list.It had said that the Cabinet took into account the findings of the report of an expert committee constituted by the Indian Council for Social Science and Research (ICSSR) before taking the decision.
It had said that the government rejected the view of the National Commission for Backward Classes and took the decision on the basis of findings of the expert committee.The affidavit was filed in compliance with apex court’s order, issuing notice to the Centre on the PIL.
Besides the organisation, three other individuals from Delhi – Ram Singh, Ashok Kumar and Ashok Yadav – belonging to OBC category have also challenged the Centre’s notification.They submitted that members of Jat community have performed much better than those of other castes.
They have sought a direction holding that Jat community is not a backward class and is not entitled to be included in the list of OBC, and annexed findings of the NCBC, which in its February 26, 2014 report had rejected the Centre’s request for recommending inclusion of Jat community in the central list of backward classes.