KOLKATA: Though at long last party leader Sonia Gandhi’s speaking to people at Uttar Dinajpur today graced state Congress leaders, but her skirting major areas did not send much encouragement to the party leaders and workers in the state.Reports reaching here late this evening from the Uttar Dinajpur said, Sonia campaigning for Deepa Dashmunshi, a Congress candidate, attacked the Trinamool Congress for “doing politics with development.’’ 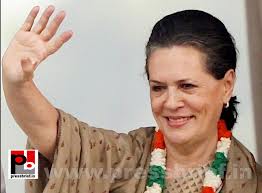 She said while Centre approved an AIIMS in the district, but neither CPI(M)-led the Left Front nor TMC government could arrange land for the centrally-funded project!She also attacked the Trinamool Congress over Sarada Chit Fund scam, saying, TMC Government abetted the loot of millions of poor in the state by this group!
Sonia took the opportunity to attack the BJP also, saying, “it’s playing with people and dividing them, while Congress wanted everyone to prosper.’’
However, while campaigning far off TMC leader and Bengal Chief Minister Mamata Banerjee attacked people who’re blaming her government over Saradha scam and said: “It’s our government which put scam leaders in jail and set up a commission to suggest a compensation package to the people who were cheated!’’
Incidentally, Sonia’s visit just after her son’s, remained a low-key affair, and wouldn’t help local party men much, feel political observers here, “as she didn’t come at time which could have, timing wise, given a boost to the state Congress leaders and workers,’’ they feel, though local Congress leaders feel at last moment, Sonia’s presence in the state would greatly benefit the party.’’