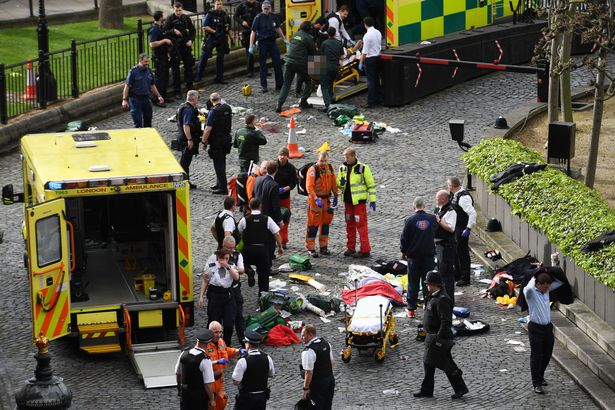 LONDON : A major security alert is underway at the Houses of Parliament after a man was shot by police as he tried to gain entry to the Palace of Westminster.

Witnesses described seeing a car crash into the perimeter fence on Westminster Bridge, hitting pedestrians, before the driver ran towards police officers guarding parliament.Onlookers said a man armed with a knife had attacked police officers at the gate before being shot.
The sitting in the House of Commons was suspended while police officers sealed off the area around the incident. At least 12 people are said to have been injured after they were hit by a car on Westminster Bridge after a vehicle drove on pedestrian and cyclists.

Three injured people were also visible on the floor outside Parliament and the Palace was placed on an immediate lock down. Prime Minister Theresa May is said to have been bundled into a car by a plain-clothes police officer and driven quickly from the scene.

The House of Commons, which was in session at the time, was immediately suspended and lawmakers were asked to stay inside.Minutes after the incident, an emergency services helicopter landed in Parliament Square, as sirens were heard outside.

Air ambulance medics came from the helicopter to assist the casualties. Several people lay bleeding on a nearby bridge, Reuters witnesses and officials said. A Reuters photographer saw at least a dozen people injured on Westminster Bridge and photographs showed people lying on the ground, bleeding heavily. The number of casualties was unclear.
The leader of the House, David Lidington, said in the chamber that an assailant who stabbed a policeman had been shot by police. Meanwhile, the London Mayor tweeted: “Avoid Parliament Sq, Whitehall, Westminster & Lambeth Bridge, Victoria St up to junction with Broadway & Victoria Embankment/tube #London”Parliament Square was closed to traffic.

The incident took place on the first anniversary of attacks on Brussels in Belgium. Reuters reporters inside parliament said a large number of armed police, some carrying shields, were pouring into the building.
Eyewitnesses described how the attacker deliberately mounted the pavement with a car on Westminster Bridge before hitting more than 12 people.The driver then reportedly got out of his car at the Houses of Parliament where he attempted to force his way past a security check-point. After being confronted by police he reportedly attacked an officer with a knife before he was shot a number of times.
A dramatic picture from the scene shows the terrorist being treated by medics as an armed police officer points a gun at him. Horrific pictures from Westminster Bridge show a woman trapped under a red doubledecker bus and multiple people lying injured on the floor being comforted by friends and passersby.
A junior doctor who helped people at the scene described seeing “catastrophic” injuries.As the attack took place, Theresa May was dramatically bundled from the House of Commons by police and Parliament was placed under lockdown.