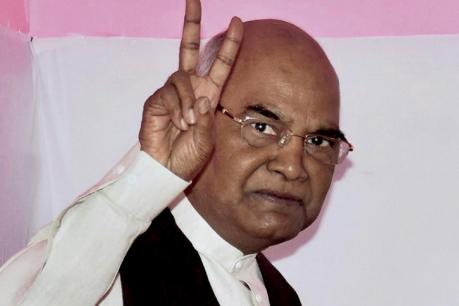 NEW DELHI : President Ram Nath Kovind is possibly the first occupant of the Rashtrapati Bhavan, whose officers were announced before he assumed office.
Those who have been named are all choices of the Prime Minister’s Office (PMO), rather than that of the First Citizen, signalling that this will be a very different kind of presidency, opposition MPs across the spectrum say.

During his tenure, former President Pranab Mukherjee, like many of his predecessors, more so those who came straight from politics to Rashtrapati Bhavan, had acted as a sounding board for politicians, not just from the Congress, the party to which he had belonged for most of his political career, but to MPs from all parties, as well as to two Prime Ministers, Dr. Manmohan Singh and the current incumbent, Narendra Modi
Mr. Modi, indeed, has gone on record to say that during his three years, Mr. Mukherjee was like a father to him, helping him find his feet in political Delhi. But the equation between Mr. Kovind and Mr. Modi, Opposition MPs say, is likely to be very different, with more than appointments of officials being decided by the PMO.
Many Opposition Rajya Sabha MPs know Mr. Kovind personally, as their time overlapped with his when he was a member of the Upper House, and say that he is a mild-mannered and pleasant person. Some of them have even paid him courtesy calls over the last few days before he moved into Rashtrapati Bhavan.

One former MP told The Hindu that after fixing an appointment, he was told his time “had been cancelled by the PMO” and he had to use other connections to meet Mr. Kovind. Another MP who met him recently said that, as an Ambedkarite, Mr. Kovind’s challenge would be how he deals with the issue of reservation, one that the RSS has always been ambivalent about.
The Congress’s Jairam Ramesh told The Hindu that “Mr. Kovind’s speech pointed towards the re-writing of history that this government is so keen on. He mentioned Gandhi, Patel and Ambedkar but deliberately left out Nehru. And he mentioned Gandhi and (RSS ideologue) Upadhyaya in the same breath.”( The Hindu)