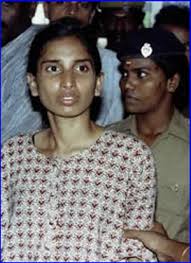 CHENNAI: Nalini Sriharan, serving life sentence in the Rajiv Gandhi assassination case, was on Tuesday granted 24-hour parole to attend her father’s memorial.
Nalini had moved the Madras High Court seeking three days leave from Tuesday for attending the 16th day obsequies of her father, who passed away last month, to held in Kottur on March 9.

In her petition, Nalini had submitted that she had made a representation on March 2 to the Superintendent of Special Prison for Women in Vellore, where she is lodged, seeking three days leave, but the official had not responded so far.
She said she was granted parole for 12 hours on February 24 to attend the cremation of her father Sankaranarayanan. The 16th day obsequies of her father was scheduled to be held in Kottur.
Nalini was sentenced to death by the trial court in the case on January 28, 1998. Her sentence was commuted to life term by the Tamil Nadu Governor on April 24, 2000.