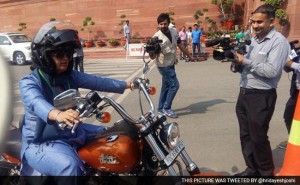 Happy Women’s Day, Ranjeet Ranjan seemed to say as she rode a black and orange Harley Davidson bike to Parliament this morning.
Ms Ranjan, the 39-year-old Congress lawmaker from Bihar’s Supaul, cut a dashing figure in a blue salwar kameez and dark sunglasses with a white helmet strapped on securely and drew much attention as she roared into Parliament.
Ranjeet Ranjan is the wife of Bihar politician Rajesh Rajan aka Pappu Yadav, who too is a Lok Sabha lawmaker from the state.
The Narendra Modi government has said it will celebrate International Women’s Day today by trying to ensure that women lawmakers get a chance to speak in Parliament. Prime Minister Modi had suggested during his reply on the motion of thanks on the President’s address last week that only women speak in Parliament today.
There are 66 women lawmakers in the 543-member Lok Sabha, the highest number ever. The Rajya Sabha has 31 women lawmakers.