AMETHI: Congress Vice President Rahul Gandhi today filed his nomination from Amethi in Uttar Pradesh in the presence of mother Sonia, sister Priyanka and her husband Robert Vadra. The Congress No. 2 is seeking re-election for a third consecutive term from the Lok Sabha constituency.”I have been working in Amethi for 10 years… We have family ties with Amethi, it will be a good victory,” Mr Gandhi, flanked by his mother, told reporters. 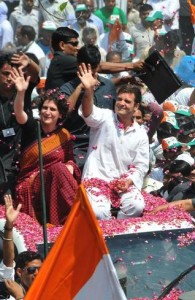 Earlier, the 43-year-old MP arrived to a rousing reception in Amethi. Perched atop an SUV, the Gandhi siblings waved as their convoy made its way through the huge crowd that had lined the entire route to the district collectorate in Gauriganj in Amethi where Mr Gandhi filed his nomination. Rose petals were constantly showered on them in line with the grand welcome promised by the local Congress unit.  500 kgs of flowers had reportedly been arranged to welcome Mr Gandhi who has held the Amethi seat since 2004.
Mr Gandhi, though, faces a tough three-cornered contest this time around with the BJP fielding actor-turned-politician and Rajya Sabha MP Smriti Irani from the seat and poet-turned-politician Kumar Vishwas representing the Aam Aadmi Party (AAP).
Both Ms Irani and Mr Vishwas have openly challenged the Congress No. 2 to a debate over development in Amethi, but so far he has refused. The constituency, which has been represented by Mr Gandhi’s mother and Congress President Sonia Gandhi in the past, has traditionally voted for the party. It goes to polls on May 7, the penultimate phase of the nine-phase general election.
The battle for Amethi is also a major test for Priyanka, who as campaign manager, will have to ensure that Mr Gandhi’s over 3.5 lakh-winning margin in 2009 is not breached this time. The 42-year-old had recently told NDTV that that she will actively campaign only for her brother and mother, who is contesting from the neighbouring Raebareli constituency after vacating the Amethi seat for her son in 2004.