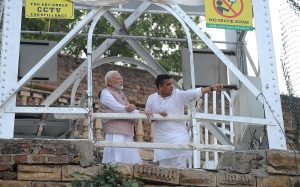 RAT). Prime Minister Narendra Modi on Tuesday visited the Morbi bridge collapse site and reviewed the ongoing search and rescue operations. Officials briefed the prime minister about the rescue operations at the site where 135 people were killed on Sunday when the British-era suspension bridge on the Machchhu river collapsed. Before he arrived at the spot, the prime minister conducted an aerial survey of the location.

The collapsed bridge connected Darbargadh Palace on one end and Swaminarayan temple on the other. The PM arrived at Darbargadh Palace where he was briefed by officials about what might have gone wrong with the bridge structure.
Just hours ahead of Prime Minister Narendra Modi visited Gujarat’s Morbi, where over 130 people died in a bridge collapse on October 30, some patients at the government hospital were selected and briefed about speaking with him, and were shifted to new beds with new sheets in a freshly painted ward.A ward on the ground floor that was empty has been deep-cleaned and new beds with fresh bedsheets set up.
This was where a few of the injured, who were earlier on first floor, were kept for the PM’s visit. Some of the bedsheets had markings of a hospital in Jamnagar, which is 160 km from Morbi.At least 40 painters worked through the night to repaint the entire exterior of the hospital, besides touch-ups inside the wards where PM Modi met the victims. Toilets got new tiles too. The hospital has got four new water coolers, too, since the tragedy on Sunday, some of which did not have supply connections.
PM Modi chaired a high level meeting in Morbi, Gujarat to review the situation in the wake of the unfortunate bridge mishap there. The PM stated that the authorities must stay in touch with the affected families and ensure that they receive all possible help in this tragic hour.
PM said the need of the hour is to conduct a detailed and extensive inquiry which will identify all aspects relating to this mishap. He also added that the key learnings from the inquiry must be implemented at the very earliest. Those present at the meeting were CM Bhupendrabhai Patel, MoS Home Harsh Sanghavi, Minister of the Gujarat Government Brijesh Merja, Chief Secretary of Gujarat, State DGP, local Collector, SP, Inspector General of 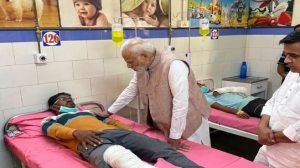 Police other officials.
Earlier, upon reaching Morbi, the PMvisited the site of the bridge mishap. He went to the local hospital where the injured are recovering. He also interacted with those involved in rescue and relief work and lauded their fortitude. Gujarat, the home state of Mr Modi, has announced a day of mourning on Wednesday. Authorities have promised a full investigation after questions were raised about whether safety checks were carried out before the bridge was reopened.
In the middle of election campaign in his home state, rival parties have slammed the PM over “event management over dead bodies”. The Congress and AAP have sought answers from the ruling BJP over how the British-era suspension bridge was reopened without a completion certificate. Closed since March for renovation, it was reopened last week and collapsed just four days later.Meanwhile, a Public Interest Litigation or PIL has been filed in the Supreme Court for a judicial investigation. It will be heard on November 14.
In his tweets Modi said went to Morbi, which witnessed the horrific bridge mishap. Met the bereaved families and extended condolences. I visited the site of the tragedy and went to the hospital where the injured are recovering. Also met those involved in rescue ops and chaired a review meeting, tweeted PM Modi The 140-year-old bridge over the Machchu river gave way on Sunday, days after it reopened following repairs. Search and rescue operations on the river resumed on Tuesday.
The bridge was a major local tourist attraction – touted by the state’s tourism website as an “artistic and technological marvel” – and reopened only last week after being shut for months for repairs. Reports said that several hundred people were on the structure when it collapsed at around 18:40 India time (13:10 GMT) on Sunday. Eyewitnesses described scenes of chaos as people plunged into the waters below and others clung on to the wreckage, waiting for rescue teams to save them. Some tried to swim to the banks of the river and managed to survive but many others were swept away by the fast-moving water. Police on Monday said at least 141 people had been killed, but later revised that number to 135, without explaining why.
(Bureau Report with Media Inputs).