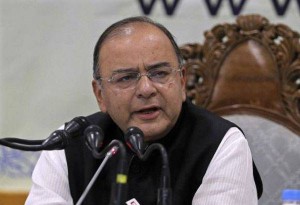 NEW DELHI: Union Finance Minister Arun Jaitley has said that Prime Minister Narendra Modi is willing to speak to everyone to get the landmark Goods and Services Tax (GST) Bill passed.

The Minister, who needs Parliament approval for the GST Bill in the Winter Session to roll out the new indirect tax regime from planned 1st of April next year, said he has spoken to almost all Congress leaders on the issue.
Talking to a private television channel, Mr Jaitley added that the Government has absolutely no hesitation even at the level of Prime Minister and he is willing to speak to everyone.

He was asked about Congress Vice President Rahul Gandhi’s charge that Prime Minister does not pick up phone to speak to Sonia Gandhi like the then Prime Minister Dr Manmohan Singh who used to engage with him as leader of the opposition in Rajya Sabha and Sushma Swaraj of Lok Sabha.

Mr Jaitley also said that the Government is open to a debate on intolerance in Parliament, emphasising India was liberal enough to not only allow dissent but also manufactured and fake dissent.