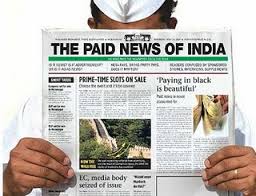 NEW DELHI: The Press Council of India (PCI) has formed a three-member committee to monitor the menace of ‘Paid News’ during the upcoming Delhi Assembly elections.
The PCI, in a statement today, announced its decision set up a three-member committee on paid news while asking media organisations to give objective reports.
Elections in India are the backbone of our democracy and the responsibility cast on media in bringing all related information to the public is heavy, it said.
PCI Chairperson Justice Chandramouli Kumar Prasad has constituted a Committee consisting of Rajeev Ranjan Nag, Krishna Prasad and Sondeep Shankar to monitor paid news during the forthcoming Delhi state elections, the statement said, referring to guidelines drawn by it about the role of media and the authorities.
The PCI said it was the duty of press to give objective reports about the election and the candidates and the public has a right to know through the medium of press all public acts of the public functionaries engaged in the election process.
“It is essential that not only should the election be free and fair but the press should be allowed unhindered access to information and venues of the election process, subject to reasonable restrictions in the interest of security,” it said.
The election time paid news phenomenon has three dimensions. The first dimension was when the reader or viewer does not get a correct picture of the personality or performance of the candidate in whose favour he decides to cast his vote.
The second dimension, it said, is when candidates do not show it in their election expense account and the third, when newspapers and TV channels who have received money in cash do not disclose it in their official statement of accounts.
“There should be a clear distinction drawn between the managements and editorial staff in media companies and that the independence of the editor should be maintained and safeguarded,” the PCI statement said referring to guidelines drawn by it.