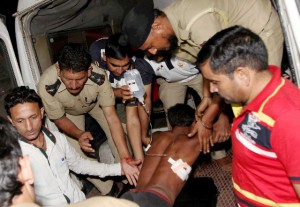 JAMMU: Pakistan Rangers violated ceasefire with heavy firing and mortar shelling overnight that targeted nine border outposts (BoPs) of the BSF in Samba district along the international border (IB), leaving a labourer injured.
The fresh round of ceasefire violations along the IB has killed one civilian and injured three so far.“Pakistan Rangers resorted to unprovoked firing on BSF posts along IB in Samba sector from 2025 hours last night”, a BSF officer said.
The Rangers fired at nine BoPs of the BSF along IB in areas between River Basantar and River Treva in Samba sector, he said, adding that they used 82, 82 and 51 mm mortar bombs at few places along the IB.
BSF troops guarding the borderline retaliated resulting in exchanges which continued till 0220 hours on Saturday, he said. There was no loss of life on the Indian side but a civilian was injured.
A civilian was killed and two others were injured Friday evening in Mangu Chak border outpost.