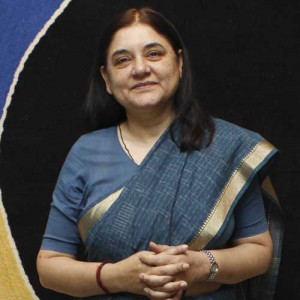 NEW DELHI: More than 9,700 cases of atrocities against women, including domestic violence and rape, have been registered since April one this year, with Uttar Pradesh seeing the highest number of such cases, the government said on Friday. These many cases have been registered with the National Commission for Women so far this financial year.
Giving details in the Lok Sabha, Women and Child Development Minister Maneka Gandhi said reasons for violation of women rights include “domestic violence, outraging the modesty of women, dowry harassment, property dispute, rape”.As per the state and union territory-wise data, Uttar Pradesh has seen the highest number of women rights violation cases so far this financial year at 6,110, followed by Delhi (1,179), Haryana (504), Rajasthan (447) and Bihar (256). Together, in the last three financial years and so far this fiscal, the total number of such cases in Uttar Pradesh stood at 44,328.
“The National Commission for Women has registered 16,584, 22,422, 32,118 and 9,786 cases of violation of rights of women in 2012-13, 2013-14, 2014-15 and 2015-16 (till date), respectively,” Gandhi said during Question Hour.
According to the Minister, action taken by the Commission include forwarding the complaints to concerned authorities. Other actions taken by the government include enforcement and implementation of laws and programme for the protection of women such as Protection of Women from Domestic Violence Act, 2005, Dowry Prohibition Act, 1961, Sexual Harassment at Workplace (Prevention, Prohibition and Redressal) Act, 2013 and women helplines, she added.