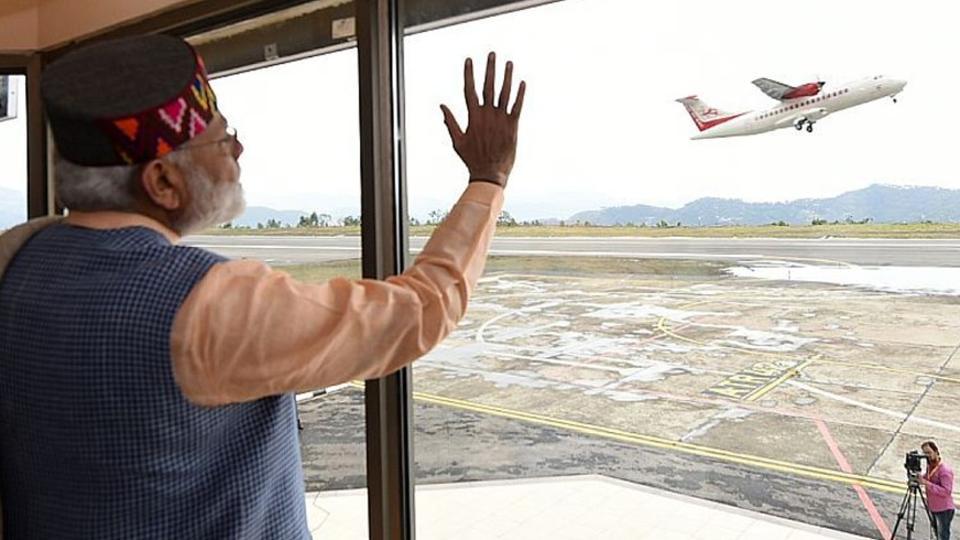 NEW DELHI : Prime Minister Narendra Modi on Thursday flagged off Shimla-New Delhi flight, the maiden flight under government’s regional connectivity scheme under which the fares of flights will be capped at Rs 2500 per seat per hour.
Accompanied by Himachal Governor Acharya Devvrat, Chief Minister Virbhadra Singh and Union Ministers P. Ashok Gajapathi Raju, Jayant Sinha and J.P. Nadda, Modi simultaneously flagged off the inaugural UDAN flights on the Kadapa-Hyderabad and Nanded-Hyderabad sectors through video conferencing.
“I want to see poor people fly,” Modi said, addressing a gathering here. “If the middle class of our country gets a chance they would change the image as well as the destination of the nation. The lives of the middle class will transform and their aspirations are increasing,” he said, adding the scheme is going to help tourism sector in Himachal Pradesh and other places where it would be launched soon.

‘UDAN’ is a first-of-its-kind scheme globally to stimulate regional connectivity through a market-based mechanism, the PMO said in a tweet.”To make air travel accessible to citizens in regionally important areas, the ‘Ude Desh ka Aam Naagrik’ RCS (regional connectivity scheme) was launched in October, 2016,” it added.
The UDAN Scheme is a key component of the National Civil Aviation Policy (NCAP) which was released on June 15, 2016.”Airfare for a 1-hour journey of appx. 500 km on a fixed wing aircraft or for 30 minute journey on a helicopter would be capped at Rs. 2,500,” the PMO said.

“This with proportionate pricing for routes of different stage lengths and flight duration,” it said.According to an official statement, 24 airports in the western region, 17 in northern region, 11 in southern region, 12 in east and 6 in north-eastern parts of the country are proposed to be connected under this scheme.
Under this programme, the government intends to connect 45 unserved and under-served airports.Five airlines were awarded 128 routes under the scheme last month after a bidding process.The selected airline operator would have to provide 50 per cent of the flight capacity with a cap of Rs 2500 per hour on fixed wing aircraft and a minimum of 5 and a maximum of 13 on helicopters with the same price cap.

Under ‘UDAN’, the operators would be extended viability gap funding.The amount is estimated to be around Rs 205 crore per annum for the operators chosen in the first round of bidding.
With Agencies Inputs