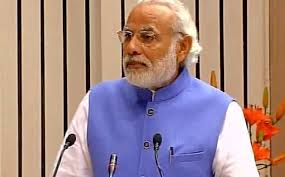 NEW DELHI: Accusing the Opposition of spreading lies, Prime Minister Narendra Modi said on Monday that nobody can snatch the right of reservation for Dalits, tribals and marginalised communities in the country.
Delivering the Ambedkar Memorial Lecture, PM Modi said, “When Vajpayee ji became PM, sections started saying reservation will go. He was PM for two terms and  nothing of that sort happened.”
“Nothing has ever happened to the issue of reservation for Dalits, tribals, where we are in power but still this lie is being spread to mislead,” he said.
Wanting the message to go out strongly, the PM said, “This is a right that nobody can snatch.”“To understand Babasaheb one has to be sensitive to the society and have devotion for the mahaprabhu,” the PM said.
The Prime Minister added that Dr Ambedkar was not just a messiah of Dalits but a visionary leader who worked for the rights of all downtrodden and oppressed people.At the function held at Vigyan Bhavan, the Prime Minister also laid the foundation stone for the National Ambedkar Memorial.
“I have got an opportunity to fulfill Babasaheb’s dream. He left us in 1956. Today, after 60 years, a memorial is being set up,” he said.“60 years have passed! I don’t know how we can explain this, but we have had to wait for 60 years for this…Perhaps this was written in my fate. Perhaps I had blessings of Babasaheb on me. I will inaugurate it on 14th April, 2018,” PM Modi said.