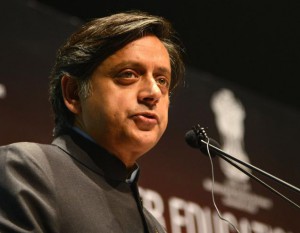 NEW DELHI: Taking a dig at ruling BJP over its stand on the JNU row, Congress leader Shashi Tharoor on Sunday said nationalism is now decided by whether one can say ‘Bharat Mata Ki Jai’ or not.

He said people should have the right to choose what they believe is correct and still be tolerant of others’ ideas in a democracy.”Today nationalism is decided by whether or not one can say ‘Bharat Mata Ki Jai’. I am happy to say it, but should I also oblige everyone to say it?
“Our Constitution gives people the right not to say it just as it gives people the right to say it as well. I will choose when to say it and that’s democracy,” Tharoor said addressing students at JNU tonight.
Tharoor said our country is not just ‘Hindi, Hindu and Hindustan’ and called for an India ‘more accepting of diversity’ which he said has been the tradition throughout history.
“India is not just Hindi, Hindu and Hindustan. We want an India with both Krishna and Kanhaiya Kumar. We want in India people from every corner of this vast land an equal stake in our future.

“If we understand that the Indian civilisation allows many religions, celebrates range of opinions and is today sustained by constitutional democracy which stands for certain values that all of us claim as our own, if this is the Indian legacy we can live, then we can all stand under that flag and celebrate,” he said.
Tharoor was speaking on ‘JNU and Nationalism’ outside the administrative hall of the varsity which has been the centre of protests ever since sedition charges were slapped on three students over an event held where anti-national slogans were allegedly raised.
Tharoor appreciated the students for stirring a debate on vital issues in India, saying student days are the days “to expand one’s consciousness”.”You may have come here for education but you are also educating the nation.
What is happening here has given the whole nation an education in the vital issues of dissent and democracy, sedition and of course of ‘azaadi’ (freedom),” he said.
Tharoor’s nearly 40-minute long speech was dotted with historical anecdotes and personal experiences and he repeatedly quoted personalities like Jawaharlal Nehru and Everlyn Beatrice Hall to drive home the idea of tolerance and diversity and their importance in India.