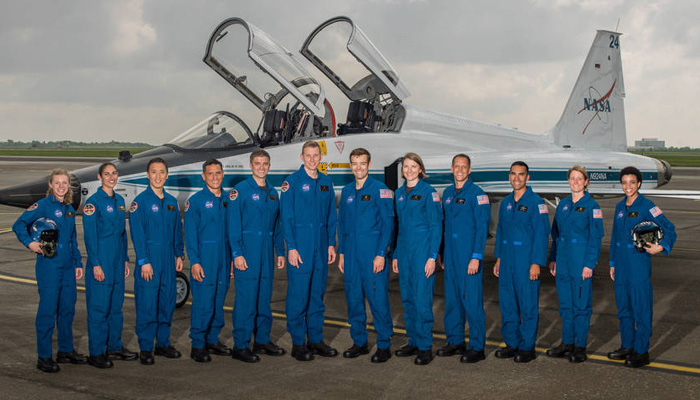 NEW DELHI : After evaluating a record-breaking number of applicants, NASA has chosen 12 new astronauts, including an Indian-American, who will be trained for missions into Earth orbit and to deep space.
The 12 new astronaut candidates – seven men and five women – were chosen from more than 18,300 people who submitted applications from December 2015 to February 2016. This is the largest group NASA has selected in almost two decades – more than double the previous record of 8,000 set in 1978.
NASA’s Hubble Space Telescope captures Universe’s brightest galaxies

The event was set inside the Johnson Space Center’s Space Vehicle Mockup Facility in front of a full-scale engineering model of NASA’s Orion spacecraft, which the new astronauts might fly in the coming years on missions beyond low Earth orbit.
The newest class of 2017 astronaut candidates were announced June 7, 2017. They comprise the 22nd class of American spaceflight trainees since 1959. The term astronaut candidate refers to individuals who have been selected by NASA as candidates for the NASA astronaut corps and are currently undergoing a candidacy training program at the Johnson Space Center.
To get picked, people had to meet some physical requirements as well as certain education and experience criteria such as having a bachelor’s degree in a STEM field or accumulating up to 1,000 hours of piloting jets.But it’s clear that this new class greatly surpasses all the minimum skills that NASA requires.Pence said that President Donald Trump is “firmly committed” to NASA’s mission in space and that “America will lead the way in space once again.”He said that NASA would continue to have the resources it needs to “make history” even though the president’s budget request cuts funding and cancels certain programs at the agency. He also mentioned that NASA would continue to collaborate with the commercial space industry in the future.

While delivering the speech, Pence touted the merits of the new astronaut class.”The courage of these men and women, and all the astronauts who have gone before, inspires me to this very day,” he said.
Learn more about the 2017 Astronaut ClassThe 12 new candidates include six military officers, three scientists, two medical doctors, a lead engineer at SpaceX and a NASA research pilot.

Lt Col Raja “Grinder” Chari, 39, whose father is from India, is a commander of the 461st Flight Test Squadron and the director of the F-35 Integrated Test Force at Edwards Air Force Base in California. Hailing from Waterloo, Iowa, Chari earned a Master’s degree in aeronautics and astronautics from MIT and graduated from the US Naval Test Pilot School.
(With PTI inputs)