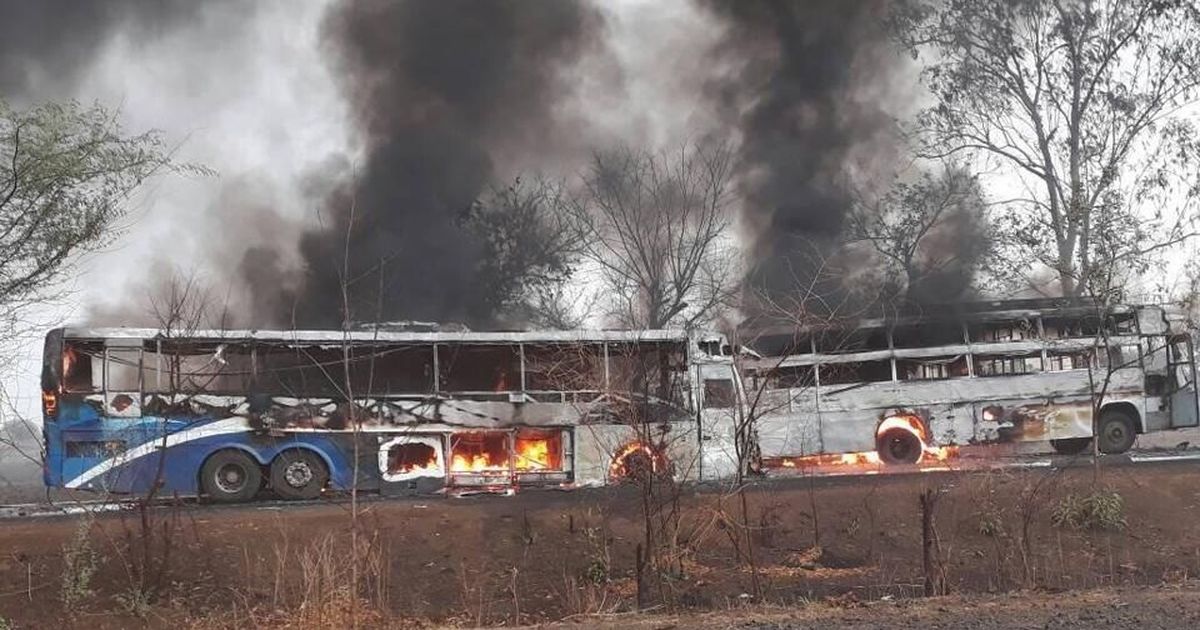 BHOPAL: Madhya Pradesh Home Minister Bhupendra Singh on Thursday said that the five casualties during farmers’ agitation in Mandsaur occurred during police firing.”Five persons were killed in police firing,” Singh told a News Agency.
The minister’s remarks assume significance as the authorities had been claiming that the police had not fired during protests at Pipliamandi in Mandsaur district in which five farmers were killed two days ago. Minutes after the incident, the then Mandsaur Collector SK Singh had told  that the police told him categorically that “neither did they fire nor did they have any orders to fire”.

Asked what provoked the police to fire, the home minister said it is being probe in the magisterial inquiry.However, he said the situation was now peaceful in western Madhya Pradesh.Meanwhile, contingents of Rapid Action Force (RAF) were today deployed in Mandsaur which has been on the boil since the violence two days ago.
The government and the police had rubbished allegations that the police fired at a crowd during a protest by farmers demanding better prices for their crops and loan waiver. In a sign that the government is on the backfoot, two top district officials have been suspended. Congress Vice-President Rahul Gandhi headed to the violence-hit area this morning by road but the administration says it will stop him at the state’s border with Rajasthan.

Other opposition leaders, including  JD(U)’s Sharad Yadav, are also heading for Mandsaur, with the state’s ruling BJP accusing them of politicising the protests. The Shivraj Singh Chouhan government is believed to be considering waiving interest on farm loans, which could benefit over six lakh farmers at a cost of around Rs. 2,000 crore to the taxpayer.

Prime Minister Narendra Modi yesterday held a meeting of top officials and ministers to discuss the crisis; over 1,000 paramilitary troops have been sent to Madhya Pradesh from the centre. Chief Minister Chouhan took to Twitter on Wednesday to make emotional appeal to farmers to end the violence that has marked the strike they began on June 1, demanding debt relief and better prices for their produce. Mr Chouhan said that he has been a farmer and understands their problems.

Congress Vice President Rahul Gandhi this morning left for Mandsaur, about 325 km from state capital Bhopal, to meet the families of the farmers who, the Congress says, were murdered in cold blood for demanding a loan waiver and better price for their crops. Union Minister Narendra Singh Tomar has accused Mr Gandhi of visiting Mandsaur in the volatile situation, only because “he is publicity hungry”.
Two companies of RAF, comprising around 100 men each, have moved into Pipliamandi, the police said.
While two companies of RAF have been posted in the district’s Garoth area, another two have been deployed along the Mwoh-Neemuch Highway to prevent any untoward incidents, they said. The situation is tense but under control, the police said.

As Rahul Gandhi travels to violence-hit Mandsaur, MP home minister admits five farmers died due to police firing DIG Ratlam Range Avinash Sharma is camping in Pipliamandi where farmers, agitating for the last seven days for loan waiver and better crop prices, defied prohibitory orders yesterday , beat up officials and policemen and resorted to violence and arson. Senior police officials have also been deployed to oversee the law and order situation in all sub-divisions of Mandsaur district, the official said.

The situation in western Madhya Pradesh is posing a major challenge for Chief Minister Shivraj Singh Chouhan and providing a rallying point for the opposition parties. The Shivraj Chouhan government had sought to cool tempers by announcing certain measures, including a loan settlement scheme for those cultivators who had defaulted on repayment of farm loan borrowed by them earlier.The scheme will cover around six lakh farmers, with accumulated dues of Rs 6,000 crore, according to the government.

More than 1,600 farmers killed themselves in the state in 2016, according to official figures. Between 2011 and 2015, according to the National Crime Records Bureau, a total of 6076 farmers had committed suicide in the state.
Farmers in neighboring Maharashtra state have held similar protests and have stopped supplies to urban areas, leading to a spike in the prices of vegetables and dairy products including in major cities like Delhi and Mumbai. The protests pose a challenge to the Modi government, which has promised to double farm income in the next two years.(With Agency Inputs)