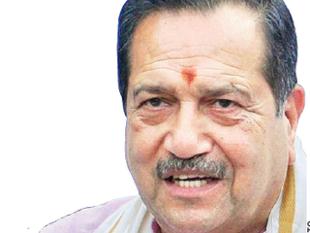 NEW DELHI :  Senior RSS leader Indresh has triggered a fresh controversy by appealing to Muslims to adopt cows and stop eating beef. Indresh Kumar made this appeal while participating in a function organised by the RSS’ affiliate Muslim Rashtriya Manch, which urged the Muslims to stop eating beef.

According to ANI, the RSS leader had called on the Muslims to protect cows by opening gaushalas (cow shelters) and stop eating beef. While several political parties have slammed Indresh Kumar over his appeal to Muslims, the Rashtriya Swayamsevak Sangh has jumped into his defence, saying the constitutional imperatives did not allow beef eating.

RSS’ ideologue Rakesh Sinha was quoted as saying by ANI that modernity and constitutional imperatives demanded that Muslims should stop eating beef. “Even during the rule of many Muslim rulers, Muslims did not eat beef, they respected cows and they had adopted cows. I think the modernity; the cultural and constitutional imperatives demand that Muslims should stop eating beef and adopt cows,” said Sinha.
Uddhav Thackeray dares BJP to go for mid-term polls, says it prefers cows over nation

“Muslim Rashtriya Manch’s appeal to Muslims to stop eating beef and adopt a cow is in consonance with the cultural and traditional civilization of India,” said Sinha. He, however, denied that the MRM was a minority wing of the RSS.
Meanwhile, the BJP has also backed Indresh Kumar’s suggestion of Muslim families adopting cows and learn about their benefits and said that the RSS leader has not asked for imposition of any rule but has simply explained the scientific advantages of the bovine.The MRM’s two-day meeting begins in the Roorkee district of Uttar Pradesh today and it is likely that the body could air its official views on beet eating and triple talaq.
With ANI inputs