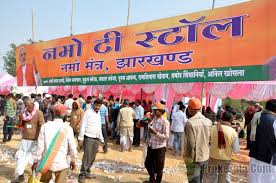 NEW DELHI : The Bharatiya Janata Party seems to have decided to make political capital out of Congress leader Mani Shankar Aiyar’s controversial ‘tea vendor’ jibe at its prime ministerial candidate Narendra Modi. So Mr Modi, who is often seen talking about his humble beginnings as a ‘chaiwala (tea seller)’, will visit a tea stall in Gandhinagar in Gujarat that will be beamed live in 1,000 locations across the country.
The move, according to which other BJP leaders will also simultaneously interact with tea stall owners across the country, is being viewed as a pointed counter to Mr Aiyar’s comments at a mega Congress conclave on Friday mocking the Gujarat Chief Minister.
“There is no way he can be Prime Minister in the 21st century… but if he wants to come and distribute tea here we can make some room for him,” the 72-year-old Rajya Sabha MP had said.
The remark, which his party, the Congress, has since disapproved of, had triggered a sharp retort from the BJP’s Arun Jaitley who said, “The strength of Indian democracy will be proved when a former tea vendor defeats a Dynasty representative.”
That “tea vendor” controversy now seems to have become the theme of the saffron party’s latest offensive against the Congress. The new campaign, the details of which are yet to be finalized, comes amidst the BJP’s ongoing three-day brainstorming meet in the national capital, its last ahead of  the big elections, barely four months away. Mr Modi is expected to address party workers this afternoon, the concluding day of the mega session.

Just last month, Mr Modi had addressed a massive rally in Mumbai where Mumbai’s tea vendors were special invitees. This followed remarks by a Samajwadi Party leader Naresh Agarwal who, in a dig at the chief minister, suggested that a person who used to sell tea did not qualify for the country’s top job, as he could never have a “national perspective.”