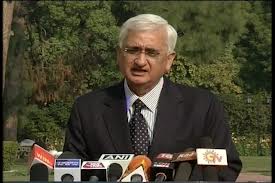 NEW DELHI :  Foreign Minister Salman Khurshid has said it was his government’s mistake to appoint  RK Singh as Home Secretary, who has launched a biting attack on Home Minister Sushil Kumar Shinde.
“We’re wedded to a system where seniority and regional representations matter. And some people slip in who should not be in that office,” Mr Khurshid told media .
“I think RK Singh should’ve gone on national TV and said the UPA government made a mistake in choosing me as Home Secretary.”
Mr Singh, who recently joined the BJP and is expected to contest the national election from Bihar, has leveled a slew of politically explosive allegations against his former boss, Mr Shinde, including that he lied that the US is working with India to catch underworld don Dawood Ibrahim.
“I’m not prepared to believe a shred of this. RK Singh was a classmate of mine. I never had a great impression about his intellect,” Mr Khurshid said.
The Congress has accused the former bureaucrat of opportunism, and alleged that he had angled for a post-retirement job.
Mr Khurshid questioned, “Why didn’t he resign then, if he felt things were so terribly wrong? How come he suddenly gets all this wisdom after he retires and joins the BJP? Good luck to him that he wants to get into politics. I hope he’s a little more honest and more faithful to the masters he’ll serve now than he was to the masters he served in the past.”
The Foreign Minister blamed Mr Singh for the “disaster” in the case against two Italian marines accused of killing two fishermen off Kerala coast in 2012.
“He’s the one who decided that Suppression of Unlawful Activities Act Navigation should be imposed, which gives a compulsory death sentence to two marines. They may have exceeded their duties but they were not terrorists,” Mr Khurshid said. “We could simply have had a trial and told the Italians that the marines were guilty or not guilty.”
The case sparked a major diplomatic row between the two countries when Rome refused to return the marines until India assured that the pair would not face the death penalty.