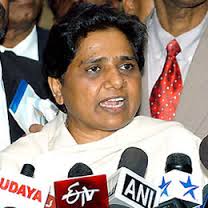 LUCKNOW : Bahujan Samaj Party (BSP) supremo Mayawati will kick off her party’s campaign for the upcoming Lok Sabha elections with a massive rally in Lucknow on her birthday on January 15.
“Former Uttar Pradesh Chief Minister Mayawati will not celebrate her birthday like previous years because of the Muzaffarnagar riots. She will instead address the ‘Savdhan Vishal Maha Rally’ at the Ramabai Ambedkar maidan here,” party’s national general secretary Satish Misra said.
On the day she would also release the ninth volume of her autobiography, Misra said, adding that participants from all over the country have started reaching Lucknow for the rally.He said Mayawati, in her address, is expected to touch upon all national issues like corruption and inflation, besides the state issues like law and order problem, communal harmony, and also give a message to her workers on how they should proceed ahead of the elections.
When asked about the cultural extravaganza in Saifai, he said that the pomp and show in the native district of Chief Minister Akhilesh Yadav only showed the highly insensitive and inhuman behaviour which could not be seen frequently.
On the Aam Aadmi Party’s possible effect on BSP fortunes, Misra said as far as his party was concerned it would have zero effect. “They should first take care of the place where they have reached presently,” he said.