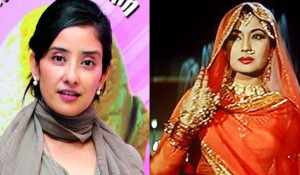 NEW DELHI : The Bollywood actress, who literally rose from the ashes like a phoenix and is raring to go places – Manisha Koirala – indeed gave death a miss to be back on the silver screen. Manisha was last in news for reportedly being offered a biopic on the life and times of legendary actress Meena Kumari.
The latest buzz, however, is that now she won`t be essaying the character of the tragedy queen in the film. According to a leading daily, Manisha has denied being offered such a movie and is completely unaware about any such project being considered.

The 44-year-old who was diagnosed with ovarian cancer in November 2012 had flown to the US for treatment. She battled the deadly disease and was declared cancer free in May 2013. She has not made any official statement regarding her comeback film as yet. But, we are sure her fans would definitely want to see their favourite Nepali beauty on big screen one more time.