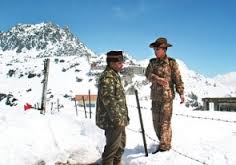 NEW DELHI : The Indian Army has denied reports that Chinese troops have entered deep into Indian territory in Depsang, the same area in Ladakh where they had pitched tents in April last year, leading to a tense three-week stand-off.
An Army spokesperson denied a report by News Agency PTI that the Chinese troops had entered 25 to 30 km into Indian territory and pitched tents.  According to the News Agency “No incursion or encroachment of Indian Territory by China has taken place along the India-China border,” the spokesperson.
He, however, said that because there is a difference in the way the two countries perceive the disputed border called the Line of Actual Control or LAC, “transgressions do occur” from time to time. India, he said, regularly takes up any transgression with China through established mechanisms such as flag meetings, border personnel meetings and normal diplomatic channels.
Sources said Chinese troops had indeed entered Indian territory in the Burtse area of north Ladakh on Sunday and were there for about 24 hours before returning. The area is at an altitude of 17,000 feet.PTI reported that an Indian patrol noticed the People’s Liberation Army (PLA) personnel 25 to 30 km inside the LAC on Sunday. Adhering to newly-drafted Standard Operating Procedures, the Indian troops returned to their base.
When they checked again on Monday, the Chinese soldiers were sitting on the ground, holding flags that read “This is Chinese territory, go back”, PTI said.A Quick Reaction Team that had accompanied the Indian team failed to make any headway with the Chinese, who refused to budge from their position, the agency reported. It said the Indian troops finally returned to their base and informed senior officers.
The Burtse area, which is adjacent to Daulat Beg Oldie (DBO), forms part of the huge Depsang plains which India says is its territory. But the Chinese dispute this. The area includes an air field which was operationalised by the Indian Air Force last year for a short while. In April last year, the stand-off over the Chinese troops pitching tents for 21 days here led to diplomatic tension. The Chinese returned only after four flag meetings between the two sides.
To deal with such incidents, India and China signed the Border Defence Cooperation Agreement or BDCA in October last year.In July this year, General Bikram Singh became the first Indian Army chief to visit China in nine years. 2014 is the Year of Friendly Exchanges between China and India.