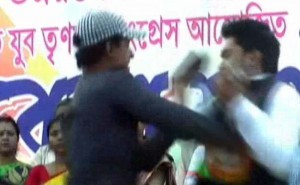 CHANDIPUR: Mamata Banerjee’s nephew and Trinamool Congress Member of Parliament Abhishek Banerjee was slapped at a public meeting, allegedly by a party worker, in West Bengal’s East Midnapore district on Sunday afternoon.
Mr Banerjee was slapped while he was on stage at the meeting that was being held in Chandipore in East Midnapore district.
The alleged assaulter was then reportedly beaten up by Trinamool workers. Media personnel present at the venue were reportedly attacked as well, and their cameras were allegedly broken.