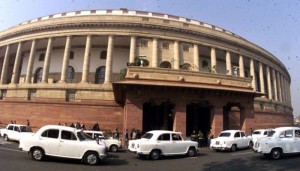 NEW DELHI: Enthused by the relatively calm functioning of Parliament in the second week of Budget session, Government has listed heavy legislative agenda for the week beginning Tuesday with just around 10 days left for the recess on March 16.
While the first week was a near washout especially in Rajya Sabha, a semblance of normalcy returned in the House in the second week with scenes of bonhomie between the ruling and the Opposition parties witnessed on at least on two occasions despite the latter launching a frontal attack on the government on issues like Rohith Vemula’s suicide and the JNU row.
The third week of Budget session begins days after JNUSU president Kanhaiya Kumar booked in a sedition case came out on bail. The sedition case had led to a huge controversy with Opposition parties closing ranks to target the government in Parliament, accusing it of “suppressing” freedom of expression. A total of 12 Bills are on the agenda for next week including 7 in the Lok Sabha and 5 in the Rajya Sabha that has to be taken up in four working days of the week on account of Monday being a holiday on account of Shivratri.
The financial and legislative agenda to be taken during the week include the bills to be taken up by Lok Sabha like the Enemy Property (Amendment & Validation) Bill, 2016 to replace an Ordinance, the Adhaar (Targeted Delivery of Financial and other Subsidies, Benefits and Services) Bill, 2016, and the Constitution (Scheduled Castes) Orders (Amendment) Bill,2016.
The financial business includes two Appropriation Bills relating to Demands for Grants on Account (Railways) for 2016-17 and Supplementary Demands for Grants (Railways) for 2015-16, two Appropriation Bills relating to Demands for Grants on Account (General) for 2016-17 and Supplementary Demands for Grants (General) for 2015-16 after initiation and conclusion of discussion).

Rajya Sabha is expected to take up for consideration and passage the Bureau of Indian Standards Bill 2015, the Whistle Blowers Protection (Amendment) Bill 2015 and the National Waterways Bill 2016, which were approved by Lok Sabha. Besides the Upper House is also likely to take up the Child Labour (Prohibition & Regulation) Amendment Bill, 2012 in addition to further consideration and return of Appropriation Bills relating to Railway and General Budgets to the Lok Sabha.
Minister of State for Parliamentary Affairs Mukhtar Abbas Naqvi said that the government was likely to also move the Real Estate (Development & Regulation) Bill which is pending in the Upper House. During the first two weeks of the ongoing Budget session, both the Houses passed the Election Laws (Amendment) Bill, 2016 giving voting rights to the people who became Indian Citizens following the exchange of conclaves between India and Bangladesh. In addition,
Rajya Sabha has passed two more Bills which were earlier passed by the Lok Sabha—The High Court and Supreme Court (Salaries and Conditions of Service) Amendment Bill, 2015 and The Carriage by Air (Amendment) Bill, 2015. Both the Houses also discussed incidents happened in the Jawaharlal Nehru University and the Hyderabad Central University. Besides, Rajya Sabha also took up two Calling Attention Motions on the breakdown of law and order in Delhi and the comments attributed to a Union Minister allegedly against minorities.
While the Lok Sabah adopted a Motion of Thanks to the President for his address to both the Houses at a Joint Session, discussion in this regard is in progress in the Upper House and is expected to conclude in the coming week.