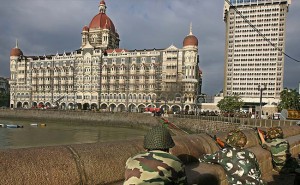 MUMBAI: The Lashkar-e-Taiba discussed a plan to attack a meeting of Indian defence scientists at the Taj Mahal Hotel in Mumbai about a year before the Pakistan-based terror group struck the city in November 2008, killing 166 people, terrorist David Headley said in court today.
Testifying via video link from an undisclosed location in the US for the second day, Headley told the Mumbai court that he had in 2007 attended a meeting of Lashkar operatives in Pakistan’s Muzzafarabad, where the plan to attack Mumbai was discussed.

“We made a mock Taj,” Headley said, and also, “They were discussing the entrance and exit of the Taj Mahal Hotel and the location of convention halls. They had information there was a meeting of Indian defence scientists in the near future… the plan was to attack during the meeting.”
He said the meeting was attended by his Lashkar handler Sajid Mir and others and “it was decided that I should go to India”. Headley said he was tasked with conducting a reconnaissance of the Taj Mahal Hotel.
The iconic Taj Hotel was one of Mumbai’s famous landmarks that the 10 Pakistani terrorists attacked on November 26, 2008.Headley, 55, conspired in the planning and execution of the deadly Mumbai attacks, filming the sites that would be attacked by terrorists operating in pairs. He told the court yesterday that he visited Mumbai seven times before 26/11 using a fake passport.

He has also detailed since yesterday how he joined the Lashkar-e-Taiba and trained under the terror group’s top leaders Hafiz Saeed and Zaki ur Rehman Lakhvi, key plotters of the 26/11 terror attack, for which, he said, officers of Pakistan’s spy agency ISI collaborated with them.
Headley is the first person to testify for an Indian terror case from a foreign country. In 2009, he was arrested in the US and agreed to share crucial information in exchange for a promise that he would not be extradited to India or be given the death penalty; he is serving a 35-year jail sentence.
In December last year, he was pardoned by the Mumbai court after he turned approver or a prosecution witness.