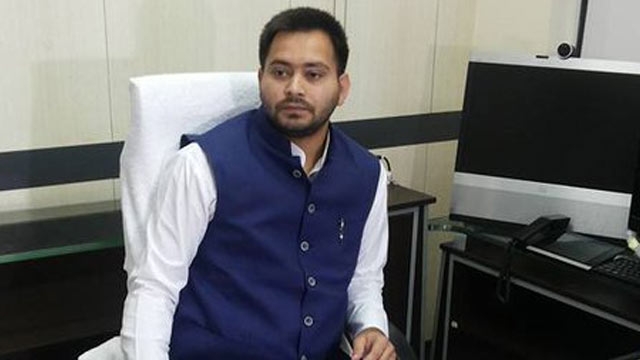 NEW DELHI : Bihar Deputy Chief Minister Tejashwi Yadav will not step down from his post, the Rashtriya Janata Dal (RJD) cleared after party meet on Monday.
RJD leader Abdul Bari Siddiqui said that no discussions were held over Tejashwi’s resignation as Deputy CM, or on Bihar Chief Minister Nitish Kumar’s silence on the row. He, however, said that the party discussed on the upcoming presidential election and the public meeting called by Lalu Prasad Yadav on August 27.

He also said that the party members discussed how take on the Bharatiya Janata Party, claiming that it is trying to destabilise the government by making efforts to demolish the party.  “Whoever opposes BJP is being targeted, We will fight back with double strength,” said Siddiqui.
Sources told Newstrack that the meeting was convened in the wake of several CBI raids on Lalu Prasad Yadav and the FIR against his son and Bihar Deputy Chief Minister Tejashwi Yadav.

According to the reports , majority of MLAs in the meeting came out in support of Tejashwi saying,”Why will he resign”? “Tejashwi Yadav has been a good leader and will always remain one,” the party said. Targetting the Bharatiya Janata Party (BJP), the RJD said, “There has been an attempt to fade us, but it will not happen. .”

Meanwhile, it has been reported that the announcement by RJD has disappointed Bihar CM, who has not commented on the CBI raids on Lalu Prasad and his family yet.  Nitish has also called an all party meeting of its legislators on Tuesday during which he might compel Dy CM Tejashwi Yadav to step down from his post. Though Kumar is yet to break his silence on the CBI raids.

Sources in the JD(U) reportedly had said that it would be an “ideal situation if Tejashwi Yadav himself offers to step down” during a meeting of RJD legislators.

Yesterday, Nitish Kumar’s Lok Samvad Programme, which was scheduled to be held today has also been postponed citing former’s health reasons. However, it has been speculated that he is avoiding sharing space with Tejashwi as well as media in view of the recent CBI raids.

Another RJD MLA Lalit Yadav urged CM Nitish Kumar to not sack Tejashwi and wait till the deputy CM is chargesheeted. “Why is Uma Bharti continuing in PM Modi’s cabinet despite being chargesheeted in the Ayodhya case.
Earlier on Friday, the CBI registered a corruption case against Lalu Yadav, his wife Rabri Devi, son Tejaswi Yadav; former Indian Railway Catering and Tourism Corporation (IRCTC) Managing Director P.K. Goyal; and the wife of Lalu’s confidante Prem Chand Gupta, Sujata on allegations of awarding the tender for development, maintenance and operation of hotels in Ranchi and Puri in 2006.

“Nitish spoke to Lalu yesterday. He was ill earlier,” said  Jagdanand Singh, a senior leader from Lalu Yadav’s party.The RJD also categorically said there were no differences between Bihar Chief Minister Nitish Kumar and Lalu Prasad Yadav. The party said the former had called the latter yesterday and had asked about his well-being.
With corruption allegations surfacing again against the first family of RJD, opposition parties, particularly Bharatiya Janata Party (BJP), have demanded that Tejaswi Yadav either resign from the top post or Nitish Kumar remove him from his cabinet.

A media report cited sources saying that Nitish is not just avoiding sharing space with deputy CM Tejashwi Yadav against whom an FIR has been lodged on charges of a amassing “benami” properties, but is also avoiding the media which has been trying to get a reaction from him on what will be his future course of action as far as continuance of Tejashwi in the cabinet is concerned after FIR was lodged against him.
On Saturday, Lalu Yadav’s daughter Misa Bharti and her husband Shailesh Kumar came under probe for an alleged Rs 8,000 crore money laundering case. The Enforcement Directorate raided three properties linked to Misa followed by hours-long questioning with the former and her husband Shailesh.
The RJD supremo, however, refuted the allegations against him and called it a political conspiracy hatched by the BJP.