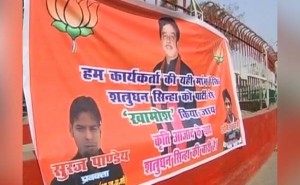 PATNA: A banner has been prominently put up in Bihar capital Patna asking the BJP to gag Shatrugan Sinha, the party’s most voluble rebel.”Khamosh,” is how party workers would like the BJP’s Patna lawmaker, says the banner, put up by the BJP Yuva Morcha, a youth wing of the party.
“Khamosh” or “quiet” is the drawl that made Shotgun Sinha famous in Bollywood films. His recently released biography is titled, “Anything but Khamosh.”
His many detractors in the BJP would agree; Mr Sinha, sulking at being sidelined by the party, has been anything but khamosh in recent days missing no chance to embarrass the party with his public utterances and tweets.If there is a controversy that the party has faced, Mr Sinha has been right there – not to defend the BJP, but to add to its discomfiture.
Last week, he had tweeted his disagreement with the party on the controversial recommendation of President’s Rule in Arunachal Pradesh by the BJP-led Centre, asking who the Prime Minister’s “great advisors” were.
Before that, he had publicly criticised Finance Minister Arun Jaitley, defending fellow Bihar MP Kirti Azad, who took on Mr Jaitley over alleged corruption in Delhi’s cricket body DDCA.
The Patna banner suggests action against Mr Sinha of the kind that was taken against Mr Azad, who has been suspended by the BJP.

The banner, put up at the city’s JP roundabout, was well timed. Mr Sinha, who has earlier been taunted with posters that have declared him missing for his infrequent visits to Patna, was in the city this once and staying in a hotel not far from the roundabout.

His response was philosophical. “When you come to politics you get both bouquets and brickbats,” he said, also suggesting an investigation into whether the poster was at all put up by people associated with the BJP.
Mr Sinha did not join other top Bihar BJP leaders in a protest outside the BJP office against the Nitish Kumar government in the state.