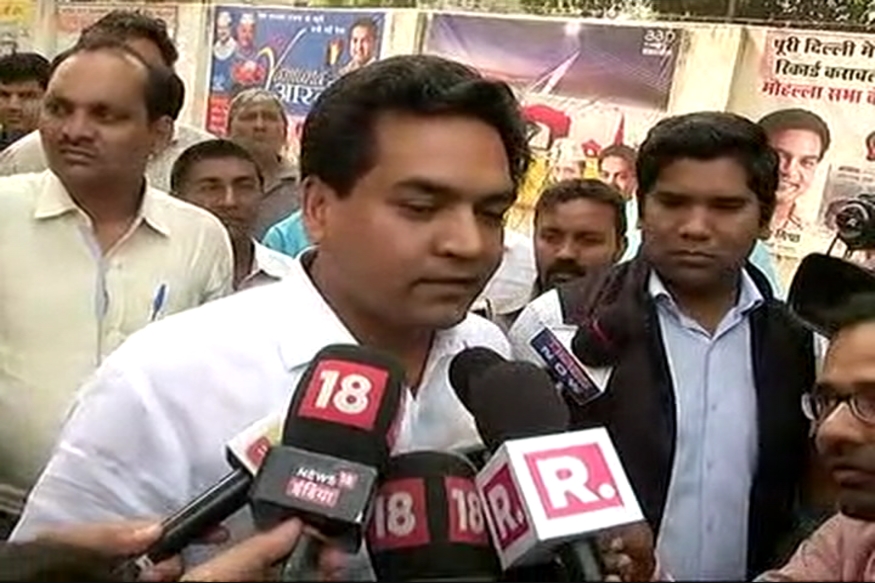 NEW DELHI : After making serious allegations of corruption against Delhi Chief Minister Arvind Kejriwal, sacked Delhi Water Minister Kapil Mishra on Monday visited the Anti-Corruption Bureau office here and gave more evidence of wrong doing by the ruling AAP chief in the 400-crore water tanker scam case
I have given the relevant documents in the water tanker scam to the ACB. I have also taken time from the CBI to lodge a complaint involving the Rs 2 crore bribery. After being a complainant in the case, now I am also a witness. The corrupt will go to jail, Mishra told reporters outside the ACB office. Mishra also called on the CBI for conducting a lie detector test on him, Arvind Kejriwal and Satyendra Jain.

The CBI should do a lie detector test on all three of us. Right now, I am at the ACB to give details of tanker scam, Kapil Mishra said. I have given tanker scam details to the ACB. I have told them about how money was wasted, how Kejriwal delayed the probe and how there were attempts to save Sheila Dikshit, Mishra said.Mishra futher claimed that he will make some important announcements at 5 pm today.

Manish Sisodia (Delhi Dy CM) can call my allegations a joke, I don’t care, Mishra said.Mishra had triggered a political storm by claiming that he saw Delhi Chief Minister Arvind Kejriwal taking Rs 2 crore in cash from Health Minister Satyendar Jain –  a charge which was categorically rejected by Deputy Chief Minister Manish Sisodia as “unsubstantiated”.
Mishra’s charge also triggered calls for Kejriwal’s resignation from the BJP and Congress.
Kapil Mishra says Arvind Kejriwal took Rs 2 crore cash bribe from Satyender Jain; BJP demands Delhi CM’s arrest “Day before yesterday (Friday), I saw Jain hand over Rs 2 crore in cash to Kejriwal at his residence. When I asked about the money, Kejriwal refused to answer,” Mishra told the media, a day after being sacked on Saturday.
Mishra said he had informed Lt Governor Anil Baijal about the issue and will provide details to investigating agencies as well. Dy CM Sisodia later rejected the allegation. “The kind of allegations against Kejriwal are unsubstantiated. No one will believe them. There is no substance in this allegation,” he added.
Driving his point home, Sisodia said that the allegations came after Mishra was removed as minister. Mishra also accused Jain of facilitating a land deal worth Rs 50 crore for a Kejriwal relative.”Jain himself told me about the deal,” Mishra said, adding he was sure Jain would soon be put behind the bars.

Mishra’s allegation have plunged the AAP into further crisis, soon after its defeat in the municipal polls. Mishra is known to be close to AAP leader Kumar Vishwas, with whom Kejriwal has forged an uneasy truce after he made comments critical of the AAP.

Mishra said many issues had been raised against the Aam Aadmi Party (AAP) in the past, including irregularities in funding during the Punjab elections, “but we always thought Kejriwalji did not have knowledge about them.””We had faith in him and always thought he would make things right. But I cannot stay silent after what I witnessed,” he said.
Mishra asked Kejriwal to clarify where the money came from and to apologise to people “if he committed a mistake”.The AAP leader insisted that he would not quit the party. “I will neither quit the party nor anyone can ask me to go.
“The BJP, the main opposition in the Delhi assembly, and the Congress quickly demanded Kejriwal’s resignation.”Kejriwal has no moral right to hold the post of Chief Minister. He must resign immediately,” Delhi Bharatiya Janata Party President Manoj Tiwari said. “I have said a number of times that Kejriwal is directly involved in corruption. Mishra’s allegations prove that point.”

Delhi Congress President Ajay Maken said Mishra’s claims were not mere allegations but testimony of an eyewitness warranting criminal proceedings against Kejriwal.”The Centre, the Anti-Corruption Bureau and the CBI should immediately take action and register an FIR against Kejriwal,” he told the media.