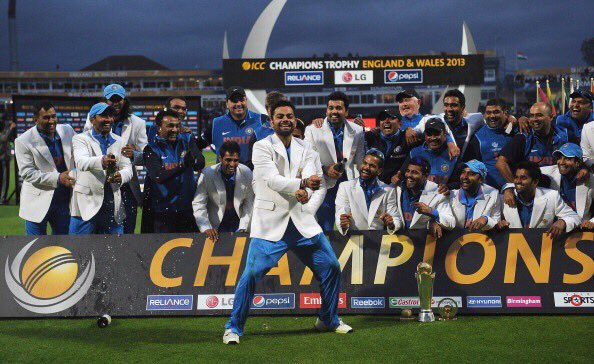 NEW DELHI : The Board of Control for Cricket in India on Monday named a 15-member squad for the ICC Champions Trophy, to be played in England and Wales from June 1. The 15-member squad, led by Virat Kohli, sees the return of Rohit Sharma and Mohammed Shami, while no new faces were introduced as the rest of the team is largely what it was for the last ODI series played by India, against England in January 2017.
Gautam Gambhir, Suresh Raina and Harbhajan Singh were three senior Indian players who failed to find place in the squad despite a good show in the ongoing season of Indian Premier League (IPL).

The naming of the team as scheduled for April 25, but was delayed as the BCCI got into a wrangle with the International Cricket Council (ICC) about the revamped revenue share formula. Rohit, after recovering from a thigh injury he sustained during the Test series against England last year, has replaced opener KL Rahul, who has been sidelined due to a shoulder injury.
Manish Pandey, who was not part of the playing XI in the the three ODIs that India played against England, retained his place in the squad. Mahendra Singh Dhoni will be the wicket-keeper in the side. Overall, the selectors kept faith in the squad which defeated England in a home series earlier this year.

“We definitely considered the name of Kuldeep. He would have been a surprise package but whether we would have played with two spinners is a question. Since Yuvraj (Singh) and Kedar (Jadhav) can bowl spin, he narrowly missed out,” chief selector MSK Prasad explained after the selection committee meeting.
“We respect IPL but in the longer format, we have to also consider the English conditions that we are playing in. Not just IPL but one needs to take into account the performance of last one year also in such a big tournament,” Prasad said. “May be one place here and there. But this is the best side.”India will play their Champions Trophy opener against arch-rivals Pakistan on June 4. The event itself will get underway on June 1.
Earlier, the BCCI had even indicated that it may not send a team to the Champions Trophy, a decision regarding which was sent aside for the boards Special General Meeting (SGM) on May 7.However, the Supreme Court-appointed Committee of Administrators (CoA) intervened and unequivocally asked the BCCI to announce the team without any further delay.
The BCCI thereafter decided unanimously during the SGM on Sunday that the Indian cricket team will participate in the Champions Trophy and the selection meeting to pick the squad would be held on Monday.Also, softening its previous stand against the International Cricket Council (ICC), the Indian board decided not to send a legal notice to the world body, calling it a conciliatory approach.