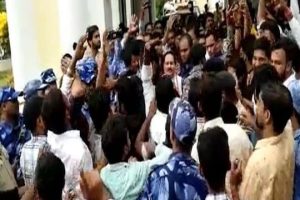 At the protest today, as students from the Leftist organisation AISA surrounded Mr Nadda, security personnel pushed through the crowd for him to move out. Mr Nadda, who graduated in political science from here and whose father worked at Patna University, was part of an alumni programme at the college seminar hall.
BJP leaders accompanying him were angry and said the police allowed the protesters to come near him. “Also, not a single woman cop was present when female students rolled on the ground before his vehicle,” said a local BJP leader. Mr Nadda landed in the state capital earlier in the day for a two-day convention of the BJP’s frontal organisations. The party held a roadshow, too, with him in the lead.
(With Media Report)