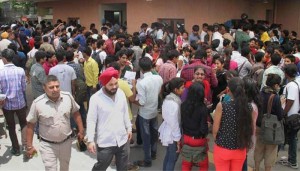 NEW DELHI : The All India Students’ Association (AISA), affiliated to the Communist Party of India-Marxist Leninist, won all four seats in the Jawaharlal Nehru University Students Union (JNUSU) election on Sunday.
The AISA has won majority on the four seats for the second consecutive year. While Ashutosh Kumar was elected as the president, Anant Prakash narayan was appointed as the vice-president. Chintu Kumari and Shafqat Hussain Butt have been elected as the general secretary and the joint secretary respectively.
For the time, JNU used the None Of The Above Option (NOTA) in the recently held polls. Other Left groups in the fray were the Students Federation of India (SFI) and the newly formed Left Progressive Front (LPF), an alliance between the Democratic Students Federation (DSF) – breakaway from SFI – and the All India Students Federation (AISF).