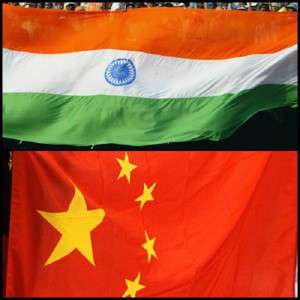 NEW DELHI: Asserting that the Sino-India relationship is on a sound track, the Chinese media on Wednesday asked India to be vigilant to the efforts to rope it into anti-China camp in the backdrop of Japan joining the Malabar naval exercises.

“The China-India relationship is on a sound track, and healthy ties are beneficial to both countries. India should be vigilant to any intentions of roping it into an anti-China camp,” an article in the state-run Global Times said on Wednesday highlighting that the India-China joint drills and the Malabar exercises involving the navies of India, the US and Japan are being held concurrently.

On Sunday, the 10-day India-China anti-terrorism joint military drill, code-named Hand-in-Hand 2015, commenced in the Chinese city of Kunming, Yunnan Province. The next day, a trilateral drill by India, the US and Japan was launched in the Bay of Bengal, the article titled ‘Concurrent India drills spark unnecessary speculation’.

“Malabar, a bilateral navy exercise involving the US and India, includes Japan this year. Speculation has therefore mounted that Washington and New Delhi are considering turning Japan into a permanent partner.” “Rabble-rousers say that India is eyeing China by including Japan in the Malabar exercise and the trilateral drill is targeted at China,” it said.
Reacting to the Malabar exercises, Chinese Foreign Ministry spokesperson, Hua Chunying told media briefing two days ago that “everyday a lot of activities takes place around the world. We can not connect every activity with China”.
The Global Times article said Indian officials stressed that New Delhi has been pursuing a “multi-vectored diplomacy”. “India’s policies and strategies are based on its national interests. It has been proved that over the past decades, India has stuck to independent foreign policies and never wants to be part of any coalition to contain China,” it said.
“The efforts of China and India moving closer have been snubbed by the West, which tries to hype the contention of the two sides. Given the border disputes between China and India, and geopolitical rivalry as well, mutual distrust is slow to dissolve, and India is vigilant against China’s rise. This creates opportunities for other countries to drive a wedge between Beijing and New Delhi,” it said.

“But China and India have reached a solid consensus that continued growth in bilateral relations should not be thwarted by divergences,” it said highlighting the consensus during Indian Prime Minister Narendra Modi’s visit to China in May that two countries “have enough political wisdom to manage and control divergences.”

“Both China and India are emerging countries and share more common interests than disagreements. Since both face an arduous task of development, neither side will prioritise geopolitical competition,” it said.