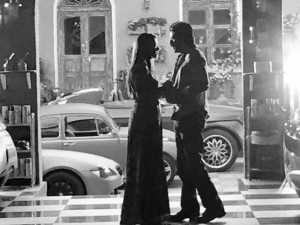 MUMBAI: There’s nothing more Shah Rukh Khan likes than working, and when it involves dancing with Kajol, ‘even better.’ The Bollywood actor, who is busy filming Dilwale in Hyderabad revealed in a tweet that he danced the night away with Kajol on Wednesday.

SRK also ‘confessed’ that he and Kajol were ‘the worst best dancers in the world. However, somebody begs to differ and it’s none other than actor Amitabh Bachchan, who tweeted just now that he too had been dancing all night and was the ‘worst worst’ dancer.
Shah Rukh and Kajol have delivered hits like Dilwale Dulhania Le Jayenge, Baazigar and Karan Arjun.
Their last film together was Karan Johar’s My Name is Khan in 2010. Dilwale also stars Varun Dhawan, Kriti Sanon, Boman Irani and Vinod Khanna in key roles and releases on December 18 this year.