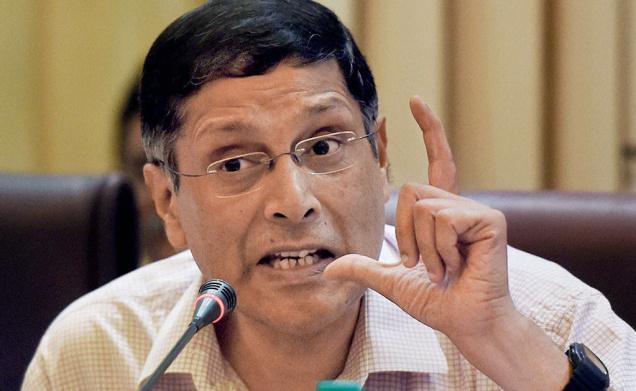 “NEW DELHI : Chief economic advisor Arvind Subramanian today flayed global rating agencies, saying they have not upgraded India “despite clear improvements in our economic fundamentals” which include inflation, growth, and current account performance. Despite its rapid growth, India still has a BBB rating. China’s rating has been upgraded to AA, despite its slowing growth and rising debts.

In a recent report, the Economic Research Department of State Bank of India has said India had a rating upgrade only once in the last 25 years.”The ratings agencies have been inconsistent in their treatment of China and India,” said the Chief Economic Advisor, and in a barbed wordplay, took a dig at ratings agency Standard & Poor’s. “Given this record, what we call Poor Standards, my question is – why do we take these rating analysts seriously at all?” he said.
Pointing out instances where global ratings agencies have fallen short of expectations, he said they consistently fail to provide advance warnings of financial crisis and downgrade a country after the fact. In the US, they had given AAA ratings to mortgage-ridden securities, which later dragged down the economy and created a crisis.
India has been consistently pushing for better ratings, which is expected to act as an endorsement to Prime Minister Narendra Modi’s economic policies and help bring in much-needed investment. Since coming to power in 2014, the NDA government has aggressively chased investment – taking measures to streamline processes and bring down inflation.
But the three key ratings agencies — Moody’s, Standard & Poor’s and Fitch – have not upgraded India, contending that the government needs to do more. In November, Moody’s refused to upgrade India, said the economic initiatives of PM Modi’s government are yet to produce results.
Among the issues the rating agencies have red-flagged are India’s high debt-GDP ratio and bad assets of its banks. The agencies argue that the debt-GDP ratio, at 69, is on the higher side and acts as a deterrent to private investment.
India had earlier red-flagged the ratings process of various agencies. In November, Economic Affairs Secretary Shaktikanta Das said India was being denied an upgrade even though growth and fundamentals have been steadily improving.ndtv.